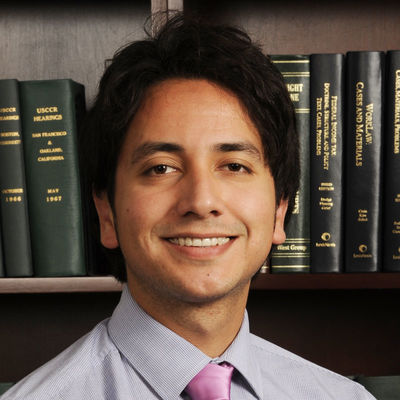 Mr. Riveros received his degree in International Law from Universidad del Rosario in Bogotá, Colombia. He has worked in the field of human rights with several NGOs addressing the Colombian armed conflict, the rights of victims, gender and labor rights. In 2009 Mr. Riveros interned at the Colombian Mission to the United Nations in New York City, as an adviser for the Fourth Committee on Special Political and Decolonization matters. Since 2011 he has worked as an assistant professor at Universidad del Rosario in the field of international law, international human rights law, and international humanitarian law.

“Indifference from the people towards a certain human rights issue removes all possible chance of success in an advocacy strategy.”

My first interest in human rights was in high school when I attended a Model United Nations and I had a human rights topic: Blood diamonds in West Africa.  I found it fascinating that States would actually limit their power towards their population through international commitments, and not only this, but that they also obliged themselves to ensure the life in dignity of their populations.  This is one of the main reasons why I decided to become a lawyer in the first place.  Then at the University, I found out about the actual human rights courts and international criminal tribunals that are in charge of determining whether a person or a State has violated human rights, and since then, human rights law has guided my life.

I’ve drawn inspiration to work in human rights more from organizations and institutions than from specific individuals.  Since I was a teenager I’ve looked up to the United Nations as an organization that embodies the hope of the community of nations to deal with a wide range of issues based on cooperation and dialogue.  This is also the idea behind my admiration for the Inter-American Court, the Commission and the International Criminal Court as well.  They are organizations that have been created based on the idea that world issues can be resolved.  Be it through dialogue, cooperation, suing states or prosecuting individuals, all of these organizations function from the basis that the world and humanity can be better, and they work towards that ideal.

As a Colombian human rights lawyer, I am mostly worried about the human rights law and international humanitarian law offenses that are being committed during the ongoing internal armed conflict that my country lives.  I am also particularly concerned about the violations derived from the context of socio-political violence.  In this sense, issues such as extra judicial killings, the funding of criminal bands to terrorize the civilian population and the displacement of indigenous and tribal groups for strategic or economic purposes, are a priority in my professional and personal life.

I consider that the two main obstacles for my work are: indifference and security.  Indifference from the people towards a certain human rights issue removes all possible chance of success in an advocacy strategy.  Some of the world’s worst atrocities have taken place due to the indifference of the people and their leaders who do not acknowledge a problem and decide to act as if it doesn’t exist until it’s just too late.  On the other hand, security is also a major concern for human rights advocates.  The fact that as human rights lawyers we direct our work towards finding the responsibility of the State for not fulfilling its domestic and international obligations, and that it’s the State itself who is in charge of granting security to its population, places human rights defenders in a very difficult situation.  This happens when a State considers that it won’t put an effort to protect those who allegedly attack it, and even worse, when it’s the State itself that the one who is carrying out the violations.

I decided to study human rights at Notre Dame because its human rights program is one of the best in the world, and also, the University is ranked among the top tier in the country.  Apart from this, I also consider that its curriculum and staff are what I expect from a human rights program and that it meets my needs of a solid academic basis with a practical advocacy approach.

The LL.M. education at Notre Dame will allow me to be a more effective human rights lawyer in two ways.  The first one is academic and practical.  This program has allowed me to understand the political nuances and legal specificities behind human rights law that ultimately make of it a more coherent system of law for me.  This technical and academic approach will be of use when I interpret and advocate using the law.  The other way is related to the reputation of the institution and the program.  A graduate degree in human rights law from Notre Dame opens many doors and I intend to take advantage of this fact to promote and advocate for human rights in my country.