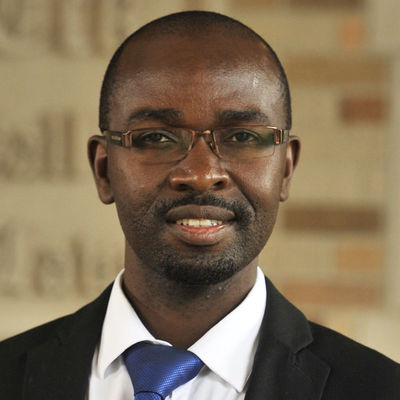 Mr. Kwesiga obtained his Bachelor of Laws Degree from Makerere University School of Law in 2013. He also holds a Diploma in Law from the Law Development Center, Kampala (2008). Mr. Kwesiga has worked with the Refugee Law Project since 2010, during which time his passion for forced migration and gender and the law issues originated. His interest in transitional justice has greatly informed his work with male victims of sexual violence. Mr. Kwesiga is a member of the Makerere University Public Interest Law Clinic, through which he continues to engage on matters of social justice especially for underprivileged communities. Mr. Kwesiga has also previously carried out legal research for the Civil Society Coalition on Human Rights and Constitutional Law.

“I often wonder how we proclaim to be equal in the eyes of God, yet treat each other differently. If there is any form of equality in humanity, then l believe it must be evident in the way we treat each other irrespective of our differences.”

Growing up in a traditional African society, one is presented with a number of injustices faced mostly by the underprivileged and minorities in the community. These injustices are in most cases entrenched in patriarchal systems in which an individual’s gender or status is a determinant of what kind of rights accrue to them. With this entrenchment, anyone that doesn’t conform to social constructs of gender are normally ostracized. This means that women and girls, the disabled, children, widows and sexual minorities among other minorities, become second level citizens behind the wealthy and men. These are some of the social injustices that nurtured my passion for human rights. I often wonder how we proclaim to be equal in the eyes of God, yet treat each other differently. If there is any form of equality in humanity, then l believe it must be evident in the way we treat each other irrespective of our differences. It was from this affront that my interest in the human rights discourse was developed.

In my first year of law school, l had the opportunity of volunteering with a refugee agency. This presented me with the opportunity of working with forced migrants, especially victims of sexual violence in conflict settings. Interviewing numerous victims revealed a dark picture of the many violations faced by persons in conflict settings. More still, a deeper interaction with male victims of sexual violence and women and girls engaged in survival sex drew my inspiration to pursue human rights law.  I worked especially closely with male victims and documented their struggles to access any form of justice. I encountered the impediment social constructs of gender play around the issue of male rape, and how it promotes the culture of silence that fuels violence and disintegration of families. These experiences informed my broader interest in gender and the law and appreciating sexualities. The plight of minorities within conflict settings and post-conflict experiences inspired me to venture into this fight, mostly because not many lawyers were interested in it.

Secondly, I remember growing up in Uganda, one name was always mentioned in the context of human rights, that of Sylvia Tamale. Professor Tamale was a big inspiration in my desire to pursue a career in law. She represented a genuine advocate for the underprivileged, which was not the case with many lawyers. Her tireless fight for minority rights earned her continuous attacks from the majority as she tended to defy majority moral perceptions. She brought to the table discussions surrounding minority rights, especially women’s rights. Listening to her developed my passion for the law and how it could be used to protect those most at risk, the minorities.

I hold a great passion for social justice issues. I am determined to ensure that the rights of the underprivileged and minorities are not continuously tramped on by the majority and those that control state power. Land, housing and property rights for the poor and women/widows continue to be disregarded by societies and systems entrenched in patriarchal and capitalistic tendencies that tend to favor the rich. The underprivileged suffer most and need protection. Irrespective of our differences, respect for human dignity should be at the forefront of whatever decisions are made and laws passed. They should never be made on the basis of moral, religious or cultural underpinnings.

The religious, traditional, and cultural underpinnings that are greatly entrenched in African societies present the greatest challenge. These three are at the core of promoting social injustices perpetrated against minority groups. Social constructs of gender affect anyone that doesn’t conform to majority perceptions about masculinities and femininities. This affects victims of sexual violence, especially where gender realities come into play. These present the biggest obstacle and until people come to appreciate humanity without placing it in a traditional setting, then it is hard to ensure respect for all and embrace diversity in humanity. Issues to do with denying women and girls the right to fully participate in social, economic and political life on the basis of their gender should never be tolerated in the world of today, irrespective of any traditional or cultural norms.

Over the years Notre Dame has positioned itself as a center for training international students, especially from developing countries, equipping them with skills that can be easily applied in their home countries in the fight against violations of fundamental human rights. Notre Dame has a solid international reputation for excellence in teaching and research, and is widely respected for its commitment to protection of human rights. The University also boasts a faculty that has hands-on experience through both practice and academic work. Interacting with the faculty, one finds a team that is not only very knowledgeable about human rights practice but also very passionate about developing policies to address numerous global human rights challenges. I also had the opportunity to interact with Notre Dame alumni, and became assured that it was the best place to nurture me and improve my appreciation of international human rights and develop skills that are very practicable in my line of work.

Today’s human rights discourse is not all about demonstrations and strikes. It’s about strategic litigation, advocacy and above all research skills. This LL.M. will equip me with the necessary skills to improve my research and advocacy skills. Human rights practice is a more skill-based practice and requires holistic skills to ensure lasting solutions. I believe l will become a better human rights advocate after my training at Notre Dame.