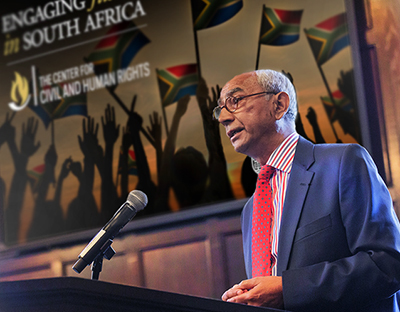 The Center for Civil and Human Rights initiated its degree program in international human rights law thirty years ago as a response to apartheid in South Africa. Beginning in 1987, lawyers from that embattled country began to arrive at Notre Dame Law School, hoping to sharpen their skills in order to fight for a just legal system. Recently, some of the earliest graduates of CCHR’s program returned to Notre Dame to discuss South Africa’s ongoing pursuit of social justice.

While much has changed in South Africa – in particular, the adoption of a constitution that guarantees a wide range of rights and freedoms – the alumni gathered at Notre Dame agreed that the full promise of South Africa’s political transformation is not yet realized. Through a series of events held on April 14-15, 2016, the alumni engaged in frank conversation about both advances and continuing challenges in their country.

Vinodh Jaichand, the first graduate of the LL.M. program in 1988, is now dean of the Law School at the University of the Witwatersrand. He described a system in which access to social and economic rights is still a challenge for many. Jaichand sees this as a fundamental problem that South Africa must face. “The planned and sustained implementation of socio-economic rights, as a part of the transition of South Africa, is essential,” Jaichand suggested. The pace of reforms in this area, however, has been slow. “We are at the starting line,” he admitted, “but we have got a long way to go.”

The transition to democracy has brought its own unique challenges. Mbuyiseli Madlanga earned his LL.M. at Notre Dame in 1990 and has risen to the highest court in South Africa, now sitting as a justice in the Constitutional Court. In residence at Notre Dame Law School as the Judge James J. Clynes, Jr. Visiting Chair in the Ethics of Litigation within the Judicial Process, Madlanga addressed a number of complex issues facing the new democracy. In particular, he discussed the difficulties associated with executive compliance with constitutional court rulings. Executive accountability, Madlanga asserted, is fundamental. “People cannot be equal before the law," he said, "unless [the government’s] conduct, and not merely the conduct of private citizens, is subject to legal constraints.” 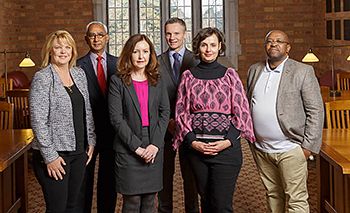 The alumni gathering also included Judith Cohen, LL.M. ’95, International Coordinating Committee Liaison Officer at the South African Human Rights Commission; Jacquie Cassette, LL.M. ‘95 Director and national practice head in the Pro Bono and Human Rights practice at Cliffe Dekker Hofmeyr; and Garth Meintjes, LL.M. ’91, President of PILnet, The Global Network for Public Interest Law (and former associate director of CCHR). Notre Dame Law School’s Christine Venter, LL.M. ’93 – who received both her B.A and law degree from the University of Cape Town – coordinated conversation with the returning alumni. Each in their turn raised specific issues confronting South African society in the wake of its extraordinary constitutional revolution, and their own efforts to address them.

That such a distinguished group of Notre Dame graduates has left an imprint on their country’s struggle for social justice is remarkable, says Sean O’Brien, Assistant Director of CCHR and Director of the LL.M. Program in International Human Rights Law. "These early graduates now lead and effect transformative legal change in South Africa," says O'Brien. "Their return to campus and their active presence within our alumni network continues to inspire our graduates and attract the most qualified and committed lawyers to our academic programs."

Video of the alumni talks can be viewed here.

A special Notre Dame online feature on our South African alumni can be found here.