Michael Hagerty (J.D. ’13), whose work for the Program on Law and Human Development took him to the Arizona-Mexico border to study firsthand the challenges facing undocumented migrants, has been named a recipient of the Thomas L. Shaffer Public Interest Fellowship by the Notre Dame Law School.

Mr. Hagerty’s field work for PLHD included hiking the desert trails blazed by northward-moving migrants, and traveling to the Tohono O’odham Nation’s Reservation, a bi-national reservation that has witnessed the highest concentrations of both migrants and migrant deaths along the border in recent years. His case study provides the historical context for migration through the borderlands, and describes civil society’s responses to the humanitarian crisis on the U.S.-Mexico border. It was so well-received that the Diocese of Tucson distributed copies of his research to all its parishes. 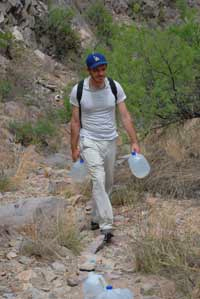 His research in Arizona and upcoming fellowship work are both expressions of a deep commitment on Mr. Hagerty’s part to effect a change. “As the son of an immigrant from Central America, immigration law is a subject I have always been interested in. Ever since I worked in Tucson with the PLHD it became apparent to me that I wanted to pursue a career in the field. Immigration is a very dynamic area of the law, and at the moment it appears that there is great change afoot in Congress. As such, I am excited to be on the cutting edge…”

Mr. Hagerty received the Shaffer Public Interest Fellowship on the strength of his proposal for a two-year public interest program to be implemented with the Public Counsel Law Center out of Los Angeles, California. During the term of his fellowship, he will helping to represent vulnerable and at-risk undocumented minors who wish to lead stable lives in the United States, safe from fear of deportation.

“Sadly, it is very difficult for young lawyers to break into the public interest legal field these days, despite the fact that there is such a dire need for pro-bono representation for the poor and voiceless,” says Mr. Hagerty. “I hope that through my involvement with Public Counsel in the coming years I am able to provide meaningful relief to families in my hometown of Los Angeles.”

More about Mr. Hagerty’s work at the Arizona-Mexico border can be found here.