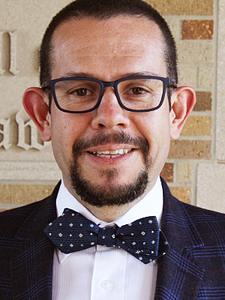 Juan Pablo Albán, current doctoral student in the CCHR-sponsored J.S.D Program in International Human Rights Law, has been appointed an Amicus Curiae for the Special Jurisdiction for Peace in Colombia. Albán will offer his expertise through non-binding opinions to these special tribunals, set up as part of the 2016 peace agreement between the Colombian government and rebel groups.

Albán, who also earned his LL.M. in international human rights law from Notre Dame in 2003, is a tenured professor of law at Universidad San Francisco de Quito’s College of Law. He has extensive experience litigating human rights cases and has served as an advisor on international law and human rights for several international organizations. While recognizing the challenges facing the peace process, he remains hopeful. “Regardless of the political tensions and ongoing criticisms surrounding the implementation of the Peace Agreement,” he says, “I believe it is a serious effort, one that - for the first time since the conflict started some six decades ago - takes into account victims' hopes and aspirations, as well as their quest for justice.”

Albán’s appointment deepens Notre Dame and CCHR’s relationship with the tribunals. Former NDLS professor and director of the CCHR, Juan E. Méndez, was part of the five-person selection committee appointing Albán, and Notre Dame graduate Xiomara Cecilia Balanta Moreno (LL.M. 2012) was named last year as one of the 51 judges who will serve in the tribunal. As Sean O’Brien, Director of Academic Programs for CCHR notes, Albán and his colleagues are embodiments of the Notre Dame spirit of ethical engagement. "Through his work as a human rights defender in Ecuador, a staff attorney at the Inter-American Commission on Human Rights, and a faculty member in a leading law school in Ecuador,” O’Brien says, “Juan Pablo exemplifies the University's mission 'to create a sense of human solidarity and concern for the common good that will bear fruit as learning becomes service to justice.'”