In the day’s close-door sessions, discussions included broad issues of advocacy for, and compliance to, human rights standards, and more detailed investigations of qualitative and quantitative methods in fact-finding. Panel members brought their particular experiences and insights to bear, with the goal of assembling a statement of recommendations for paths forward. No such detailed set of recommendations for human rights fact-finding currently exists.

In her public talk, “Human Rights Fact-finding in the Era of Fake News,” Dr. Callamard spoke of a crisis in the human rights framework centered on a rise in populism and widening social and economic inequalities. “Although the diagnoses may vary in emphasis and lead causes, the conclusions are strikingly similar,” she said. “Liberal and democratic values are in jeopardy, as is a rule-based international system. The norms it embodied are subject to multiple attacks that, once taboo, now quite to the contrary, are both claimed and carried out with pride.”

Turning to the role of contemporary information technologies in such attacks, Callamard focused in on the degradation of “facts” as foundational truths. “I think there are facts that sustain the test of intense scrutiny and extreme gazing, including human rights fact,” she explained, “but a warning against the solidity of facts, or rather, our belief in the solidity of facts, does resonate in the new political and informational ecosystem of the 21st century. It seems as if social media eats fact with great appetite.”

Callamard, however, made clear that technology alone does not explain the current climate of distrust. “What I want to insist upon here is that there is nothing organic or inherent to the digital technology in this phenomenon. Instead there are individuals, leaders, keen and eager on using the unprecedented capacities of the new technology for ends varying from political opportunism to spreading ideas and ideologies for which they probably could not have found an audience otherwise. And the main guarantee of that process is trust – trust in institutions, and trust in fact.” 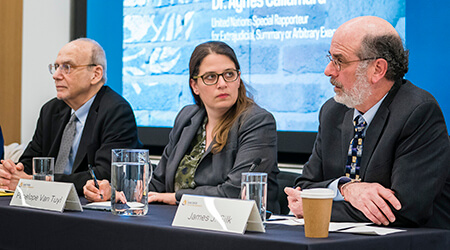 Responding to the address, James Silk, director of the Orville H. Schell, Jr. Center for International Human Rights at Yale Law School, reflected upon differing concepts of truth. “One definition of truth is factual truth….people devoted to progressive social change, and human rights, tend to value factual truth,” Silk observed. “But for a lot of people, factual truth is only the means to an end. What they’re valuing is what you might call the greater truth, and in that sense ends tend to justify means. You see this in the promotion of utopian and totalizing political visions.”

In her response, Penelope Van Tuyl, associate director of the Handa Center for Human Rights and International Justice at Stanford University, drew attention to the complex nature of contemporary communications. “Of course there’s nothing new about lying or propaganda, and to the extent that it’s new it’s the network nature of it; it’s the amplification of the ability of the individual to access those means to spread,” she said. “But of course with that amplification capacity comes the capacity to combat that.” This advantage, however, is often difficult for states to take advantage of. "It seems like we're in a moment where so many globalized practices….outpace and stretch beyond the capacity of any one single state to regulate, and government structures seem often ill-prepared to effectively understand that which they need to regulate."

The concluding response from Gerald Neuman, director of Harvard University’s human rights program, returned to Callamard’s insistence on the primacy of ideology. “We live in a time where there’s a great deal of interest in the problem of populism, and what populism is doing to human rights,” Neuman said. “From my perspective it’s a very dangerous time, not solely because of populism, but because of populism in combination with the other forces that are operating in the world, like authoritarianism in very powerful states…This populism, because it favors the unconstrained implementation of the popular will, is incompatible with the ideology of human rights. It rejects constraint and it also rejects fundamental human equality, which is the absolute core of the human rights system.”

At the heart of the day's conversation was an understanding that neither technology nor ideology alone is to blame for a corrosion in fact, but the combination of the two. As Callamard summed up: "It is what we are witnessing right now – the behavior of political leaders with the assistance of technology as yet to be fully comprehended – that is eating at the very heart of what makes a fact a fact." 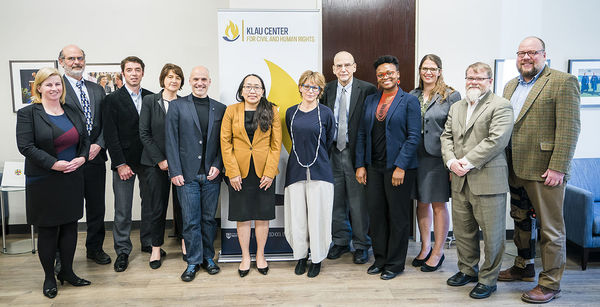 Taking part in the day's expert roundtable on human rights fact-finding were: