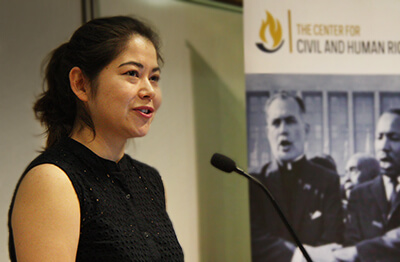 Arianna Cook-Thajudeen wasn’t certain what purpose her undergraduate degree in philosophy would ultimately serve, but she knew her skill: an ability to read deeply and carefully into difficult texts. At Notre Dame this ability expressed itself in long hours studying case law, and the only question that remained was the higher purpose. What kind of law was she best suited to pursue?

Armed with an interest in social justice, Arianna signed up for Notre Dame Law School's Appalachia Externship. This week-long program allows students an opportunity to provide pro bono legal services to residents in the coal mining region of eastern Kentucky, and there Arianna made an important discovery. “Prior to that experience I assumed that a career in law meant being either a defense attorney or a prosecutor,” she explains. “Suddenly I was introduced to the concept of legal aid lawyering, and realized that many career paths existed that I didn’t know about before.”

Last Spring, The Center for Civil and Human Rights named Arianna its first Summer Fellow, helping extend her reach into public interest law by funding her work with the National Housing Law Project (NHLP), based in San Francisco. Her work centered on violence against women, and she was tasked with learning a wide range of complex regulations around the subject, creating informational materials around them, and reviewing public housing applications to HUD to check for compliance. Another aspect of her work was the review of public comments raised when new regulations were proposed.

Arianna learned the real significance of this process when both the public and political actors pressed against any move to increase protections. The current tide of antiregulatory sentiment is felt keenly in this work, she says, especially as rules dictate that any new regulation be matched by the elimination of two others. “The new political environment has made this work all the more difficult,” she explains. “Even under traditional administrations the work of NHLP was uncertain, but now the organization doesn’t know what to expect. New immigration policies, increased ICE activity, all of that makes public housing providers uncertain about the future.”

In the end, the fellowship provided Arianna with not only valuable skills training, but also a vivid lesson in on-the-ground policy advocacy. “Going into the experience, I didn’t have a clear picture of what policy advocacy entails,” she says. “I understood that interest groups would resist policy when it made their jobs more complex, but I didn’t appreciate the level of political bargaining that the work of passing laws involves.”

Upon her return to Notre Dame, Arianna shared her experience at NHLP and her insights into current challenges in housing law. The talk may be viewed below.