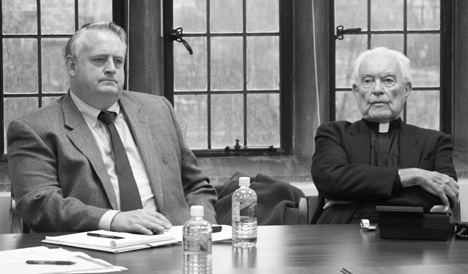 The Center for Civil and Human Rights mourns the death of Ambassador Richard S. Williamson, who served as co-chair of the Center’s advisory committee from 2007-2010.  He died on Sunday, unexpectedly, of a cerebral hemorrhage at age 64.

Doug Cassel, Director of The Center for Civil and Human Rights during Williamson's tenure on the advisory committee, remarked on the Ambassador's life. “Rich Williamson was a man blessed with a warm heart, a generous spirit, a broad mind, and a humane vision for the world," Cassel said. "We at Notre Dame are fortunate to have known him.  We mourn his passing, and pray for his family.”

A long-time partner in the Chicago office of Winston and Strawn, Williamson had recently left to start his own consulting firm, Salisbury Strategies. He served as a top foreign policy advisor to Mitt Romney and other Republican office holders and candidates.

In 2008, he was appointed special envoy to Sudan by President George W. Bush.  While serving in this post, he provided engaging “behind the scenes” lectures on his diplomatic efforts on multiple occasions to the Notre Dame community. Earlier in the Bush Administration, Williamson, who had broad foreign policy and negotiating experience, served as Ambassador to the United Nations for Special Political Affairs and as Ambassador to the U.N. Commission on Human Rights.

Previously, he served in senior foreign policy positions under Presidents Ronald Reagan and George H.W. Bush, including as Assistant Secretary of State for International Organizations at the Department of State, and an Assistant to the President for Intergovernmental Affairs in the White House. He also has served as Chairman of the Illinois Republican Party.

In addition to his service to Notre Dame, Williamson was active in a wide variety of civic organizations, serving on the board of directors of the International Republican Institute; the board of the Committee in Support of Russian Civil Society; a member of the advisory committee for the International Human Rights Center, DePaul University, and a member of the Council on Foreign Relations.

More coverage of Ambassador Williamson’s death can be found here and here.