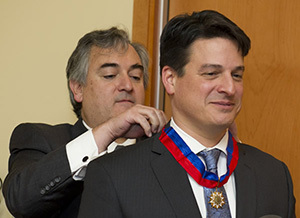 Center for Civil and Human Rights Director Paolo Carozza, who also directs the Kellogg Institute for International Studies (kellogg.nd.edu), received the Order of Merit of Bernardo O’Higgins, Chile’s highest state honor awarded to foreign citizens, at a private ceremony on the Notre Dame campus on December 17.

Chile’s permanent representative to the Organization of American States, Ambassador Darío Paya, presented the award in recognition of Carozza’s work on the Inter-American Commission on Human Rights (IACHR).

“He earned the admiration of the state, colleagues, citizens, and victims alike,” said Paya, observing that Carozza also made an invaluable contribution to the Inter-American system as a whole by conducting long-lasting procedural reforms with “authority and impartiality.”

A specialist in comparative and international law, Carozza served as a member and then president of the IACHR from 2006 to 2010. In that role, he helped to address the abuses of past political regimes and foster the conditions for democratic governance throughout the hemisphere. In particular, he served as rapporteur for Chile.

Lauding the integrity and sincerity of Chileans working for human rights, Carozza called the award a confirmation of “a certain relationship, a belonging to the people of Chile.”

“It is important to have countries that take their obligations seriously,” he said.

The Order of Merit, which Carozza received at the level of “commander,” is named for one of Chile’s most famous founding fathers, the general Bernardo O’Higgins.

“A Chilean version of the ‘fighting Irish,’” said Paya, who noted more seriously, “no other university has stronger ties to Chile than Notre Dame.”

In his remarks, University of Notre Dame Provost Thomas Burish noted Carozza’s “uncommon talent and commitment” as well as the close, long-standing relationship between Notre Dame and Chile, which he visited for the first time in Carozza’s company earlier this year.

“I saw why he is so admired in Chile and Latin America,” Burish said.

This story was written by Elizabeth Rankin, and was first posted at: kellogg.nd.edu/faculty/news/carozza_award.shtml

Originally published by Elizabeth Rankin at law.nd.edu on December 18, 2012.