The Most Reverend George Murry

Bishop of the Diocese of Youngstown (OH) and Chairman, Ad Hoc Committee Against Racism
U.S. Conference of Catholic Bishops

Throughout Christian history, the Church has called for men and women of all races to be treated equally. Unfortunately, that voice has not been consistent. Now is the time for the Church to become a consistent voice against racism. This talk will explore both the history of the Church's statements on racism and the possibilities that exist for the future.

Lunch will served in the Forum following Bishop Murry's talk. 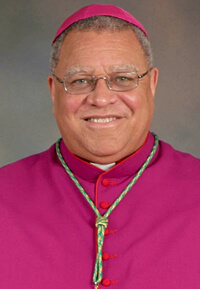 Bishop Murry was born in Camden, New Jersey, in 1948. After graduating from Catholic elementary and high schools, he attended St. Joseph's College in Philadelphia, Pennsylvania, St. Thomas Seminary in Bloomfield, Connecticut, and St. Mary's Seminary in Baltimore, Maryland where he received a bachelor's degree in Philosophy in 1972. That same year he entered the Society of Jesus. He was ordained for the Maryland Province of the Society of Jesus on June 9, 1979. He earned a Masters of Divinity degree from the Jesuit School of Theology in Berkeley in 1979 and a doctorate in American Cultural History from George Washington University in Washington, D.C., in 1994.