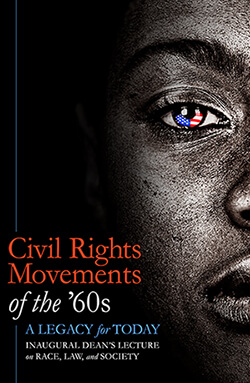 Civil rights activist Diane Nash will visit Notre Dame Law School on Tuesday, March 7, to deliver the Inaugural Dean’s Lecture on Race, Law, and Society. Ms. Nash will relate her experience at the center of the U.S. civil rights struggle, the grassroots movements that powered social change, and the relevance of those lessons for a nation facing renewed challenges.

A leader of the civil rights movement, Nash was raised in a middle-class Catholic family in Chicago before attending Fisk University in Nashville, Tennessee, where she first encountered overt racial segregation. Her experiences led her to become a founding member of the Student Nonviolent Coordinating Committee, which led to her arrest and jail time for lunch counter sit-ins in 1960. A year later, she was on the front lines in leading Freedom Rides to force the desegregation of travel on public transportation in the South. As an instructor for the Southern Christian Leadership Conference led by Rev. Martin Luther King Jr., Nash played an integral role in shaping the Selma right-to-vote movement that eventually led to the Voting Rights Act of 1965. She went on to peacefully protest the Vietnam War and work in support of women’s rights.

Among many honors, she is a recipient of the Rosa Parks Award, the Distinguished American Award from the John F. Kennedy Library and Foundation and the LBJ Award of Leadership in Civil Rights from the Lyndon Baines Johnson Library and Museum. In 2016 Ms. Nash was awarded an Honorary Doctor of Laws Degree by the University of Notre Dame.

The Dean’s Lecture on Race, Law, and Society is presented by Notre Dame Law School, The Center for Civil and Human Rights, and the Office of the President. Special thanks to the Department of Africana Studies for their support.