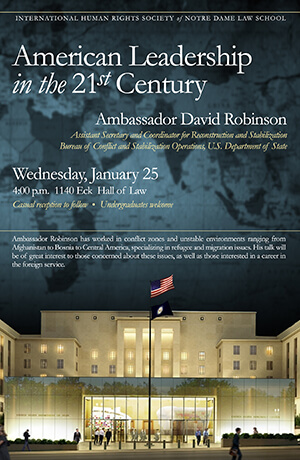 Ambassador David Robinson, Assistant Secretary and Coordinator for Reconstruction and Stabilization Bureau of Conflict and Stabilization Operations, U.S. Department of State, will deliver a talk on the future of American leadership as it relates to issues around the world. Ambassador Robinson has worked in conflict zones and unstable environments ranging from Afghanistan to Bosnia to Central America, specializing in refugee and migration issues. His talk will be of great interest to those concerned about these issues, as well as those interested in a career in the foreign service. 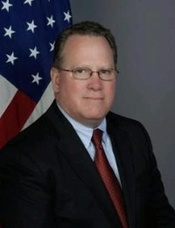 Ambassador Robinson received a B.A. from the University of Notre Dame, an M.S. from the National War College, and a Master of Divinity from Christ the King Seminary.

This event is being presented by the International Human Rights Society of Notre Dame Law School.