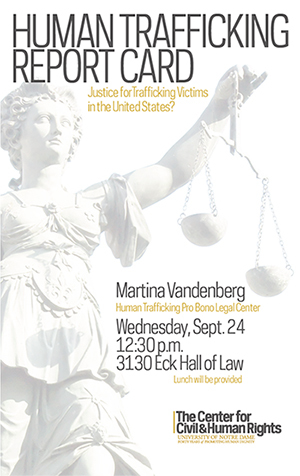 The Center for Civil and Human Rights was honored to welcome Martina Vandenberg, founder of the Human Trafficking Pro Bono Legal Center, to deliver a lecture to the public entitled “Human Trafficking Report Card: Justice for Trafficking Victims in the United States?”

Vandenberg critiqued the State Department Trafficking in Person (TIP) Report and the Department of Justice Attorney General’s Annual Report to Congress, asking whether the Unites States deserves the top markings we give ourselves every year for fighting trafficking. According to Vandenberg, the TIP Report has only included the United States since Secretary Hillary Clinton was in office.

The TIP Report judges countries based on prosecution, protection, and prevention of human trafficking, as well as partnership. According to Vandenberg, the number of prosecuted trafficking cases in the United States is “quite pathetically small.” In 2013, only 161 cases of trafficking were prosecuted by the Federal Government. As far as protection, Vandberg said, “For foreign-born victims, it is very difficult to cooperate with law enforcement unless you have some kind of status… but only 171 trafficking victims in the United States received Continued Presence in 2013.” Continued Presence grants temporary legal status for non-citizens while cooperating with law enforcement. “To its credit, the US Government has something called the blue campaign,” a national education campaign to prevent human trafficking.

Vandenberg identified significant challenges and possible solutions to fight human trafficking in the United States. According to Vandenberg, “the system of guest-worker visas leave migrants especially vulnerable “because the visa is tied to the employer, it makes it much easier for the employer to exploit them, because the moment they walk out the front door, they’re out of status and undocumented.” Many victims of sexual trafficking never come forward because they are ashamed or afraid of prosecution for solicitation by local courts.

“What we have in the US is a huge disconnect between what happens at the federal level and what happens at the local level,” Vandenberg said, “It’s a matter of educating local authorities.” Once victims com forward, according to Vandenberg, “When things go right in the sex trafficking cases what matters in these cases is whether the victims have a lawyer.” Pro Bono lawyers like Vandenberg guide victims through criminal and civil legal proceedings

Martina E. Vandenberg is the founder and president of the Human Trafficking Pro Bono Legal Center, which empowers trafficked women, men, and children to seek justice. She has spent nearly two decades fighting human trafficking, forced labor, rape as a war crime, and violence against women. Vandenberg has represented victims of human trafficking pro bono in immigration, criminal, and civil cases. Widely regarded as an expert on an array of human rights issues, she has testified before the Senate Judiciary Subcommittee on Human Rights and the Law, the Helsinki Commission, the House Foreign Affairs Committee, and the House Armed Services Committee.