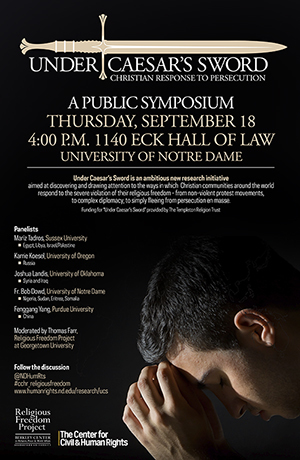 The Center for Civil & Human Rights hosted a symposium on Thursday, September 18, with prominent scholars of Christianity who will participate in the CCHR and Religious Freedom Project’s joint research initiative "Under Caesar’s Sword: How Christian Communities Respond to Repression."  The conversation marks the beginning of the study funded by a $1.1 million grant from the Templeton Religion Trust through which 15 scholars will research the responses to persecution of some 100 Christian communities in over 30 countries.

The symposium featured five of the initiative’s scholars, experts on Christianity in regions with religious conflicts that have appeared in the headlines recently. “A great sorting out [of minorities] is taking place today in the Lebanon area, and the Christians don’t have a place in these new nationalist identities that are being allied with religious communalism,” said Joshua Landis, Director of the Center for Middle East Studies at the University of Oklahoma, who will conduct research on persecuted Christian communities in Syria and Iraq.

“When regimes choose to have a religious-mediated kind of citizenship, where your citizenship identity and rights are associated with whether you belong to the religious majority or not, that’s when things go wrong,” argued Mariz Tadros, fellow at the Institute of Development Studies at Sussex University, who will conduct research in Egypt, Libya, and Israel/Palestine, “that was the unfortunate predicament of the Christians of Egypt after January 2011.”

According to our own Assistant Professor of Political Science and Founding Director of the Ford Family Program in Human Development Studies and Solidarity, Fr. Robert Dowd, Christians in countries with secular governments can fall victim to societal persecution. “Some say that last year, more Christians because of religious persecution in Nigeria than in all other countries combined…[even though] the constitution of Nigeria is religiously neutral.” Fr. Dowd will conduct research in Christian communities in Nigeria, Sudan, Eritrea, and Somalia.

All 15 scholars met on Friday to discuss the three-year project that will culminate in a public presentation in Washington D.C, an international conference in Rome, and the production of resources available through various media. Stay updated with the project’s blog, Arc of the Universe, at arcoftheuniverse.info.

Appearing on the symposium panel were:

More information about the research project can be found here.