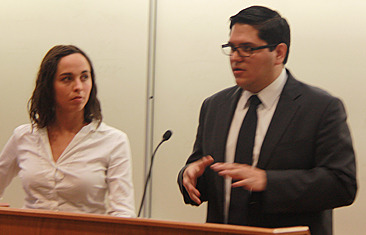 Ms. Guadarrama began with an historical overview of the political, economic, and social factors that have contributed to the often violent clash between state actors and privatized drug cartels in Mexico, and the reasons behind mounting tensions across the Mexico-US border over the sale of both drugs and weapons.

Mr. Alemán then discussed the results of the conflict - the disappearances, murders, and denials of due process that have resulted from the drug war. Using the example of a number of key cases, Mr. Alemán brought to light the often ignored human rights violations within Mexico arising from the state's efforts to control drug-related commerce.

This event was sponsored by The International Human Rights Society.