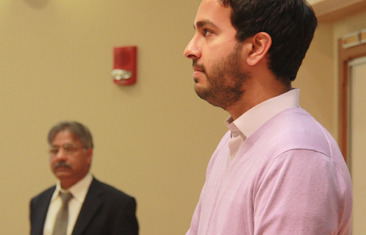 CCHR LL.M. students Peter Jacob and Mustafa Ahmed present an overview of the situation that minorities face in Pakistan, related to the systematized restriction of religious expression by the current government.

Mr. Jacob began with the founding of Pakistan and its history, introducing a white stripe on the national flag to represent religious minorities. Under military dictatorship, however, Islam became institutionalized; even under democracy, Mr. Jacob asserted, there developed a "religious economy," which brought the inevitable economic persecution of minority religions as the majority religion took a monopoly over economic assets. This led, in his assessment, to the commodification and codification of competition between religions.

Following Mr. Jacob’s presentation, Mr. Ahmed answered questions about the impact of powerful individuals, such as Malala Yousafzai, as well as the laws governing minority religions.

The event was sponsored by the International Human Rights Society at NDLS. Video of the talk may be viewed below, and the slide presentation may be viewed here.