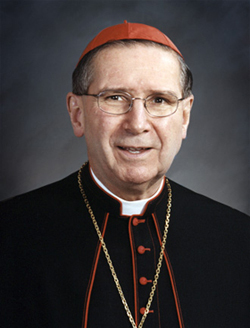 His Eminence Cardinal Roger Mahony, Archbishop Emeritus of Los Angeles, is urgently concerned with the reform of the nation’s immigration policy, and he wants Catholic college and university students to be as concerned as he is.

Speaking with nearly 100 students and faculty members in the auditorium of Notre Dame’s Eck Hall of Law on October 6, 2011, Cardinal Mahony insisted that America’s 220 Catholic colleges and universities and the 800,000 students enrolled in them have a crucial role to play in immigration reform. “Catholic universities like Notre Dame are able to bring to the discussion something that secular institutions simply can’t,” Cardinal Mahony said. “Our interest in this issue has a faith foundation which reaches all the way back to the Old Testament and to the specific laws given by God to Moses. It reaches back to Matthew 25:35, where Jesus tells us that when we welcome a stranger in his name, we welcome Him. The history of our advocacy on behalf of the immigrant is underpinned by God’s revelation and by the consistent teaching of the Church.”

Cardinal Mahony visited Notre Dame for a month during which he elaborated on this theme in discussions with students and faculty, in homilies in residence hall Masses, and as a guest lecturer in undergraduate and graduate courses.

His law school talk, hosted by Notre Dame’s Program on Law and Human Development and co-sponsored by the Center for Social Concerns and Institute for Latino Studies (ILS), was preceded by a presentation given by NDLS alum Jessica Brock (B.A. ’05, J.D. ’10, LLM ’11), postdoctoral research fellow at the ILS, on the DREAM Act. The acronym stands for Development, Relief and Education for Alien Minors, and it labels a legislative proposal brought before Congress numerous times over the past 10 years and now awaiting House and Senate committee consideration later this year.