“Throughout the world today, in free nations and in totalitarian countries as well, there is a preoccupation with the subject of human freedom, human rights. And I believe it is incumbent on us in this country to keep that discussion, that debate, that contention alive.” 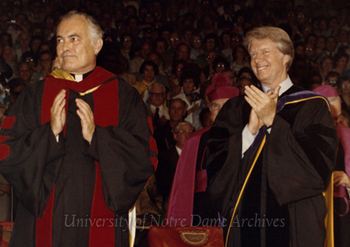 President Jimmy Carter delivered the commencement speech to Notre Dame’s graduating class in 1977, echoing and reaffirming the hopes that Fr. Hesburgh had expressed five years earlier. The President’s remarks assumed the weight of a policy statement, but he also reminded those gathered that their president, Rev. Theodore M. Hesburgh, had long been a proponent of human rights.  “His interest in the Notre Dame Center for Civil Rights has never wavered. And he played an important role in broadening the scope of the center's work--and I visited there last fall--to see this work include, now, all people in the world…” 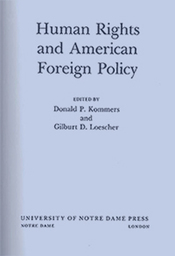 Indeed, by 1976 the Center had begun to fully embrace the field of human rights, and under the guidance of the Center’s second director, Donald Kommers, new areas of research were being tapped. Kommers, a professor of political science and law specializing in German constitutional law, had also served as an advisor to President Carter’s Commission on the Holocaust and was widely published in comparative constitutional issues. His international perspective was reflected in the work of the Center.

Most significantly, in his second year as director Kommers organized a major international conference at Notre Dame entitled “Human Rights and American Foreign Policy.” The three-day event in April 1977 began with a full day of sessions dealing with the philosophical and ideological underpinnings of a human rights discourse, before turning attention to the connections between human rights and foreign policy. A volume of the collected essays emerging from this conference would be published in 1979 under the conference’s title. 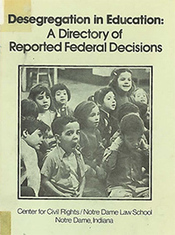 Alongside this expanded, global, vision, the Center continued to pursue the civil rights agenda upon which it had been founded. Published in 1977, the Center’s “Desegregation in Education: A Directory of Reported Federal Decisions” and the Kommers article “Affirmative Action: How Far Have We Come” added to the research promised as part of its mission. The next year grants were awarded to begin work on the history of civil rights policy under the Eisenhower Administration, but also to undertake a study of American immigration and refugee policy against the backdrop of developing human rights law. The findings of this study, along with the Center’s recommendations, were submitted to the Select Committee on Immigration and Refugee Policy in 1980.

Read a section of the Immigration and Refugee Policy Report here.

Speakers delivering the Center’s annual lectures also reflected the newly expanded vision. U.S. Circuit Court Judge Leon Higgenbotham’s 1978 “Race and the American Legal Process” was followed, in 1979, by the Assistant Secretary of State for Humanitarian Affairs Patricia Derain, who spoke on human rights as reflected in American foreign policy, and by Kenneth Karst's presentation entitled “Equality and Community: Lessons from the Civil Rights Era.” A dedication to studying and promoting the rights of all people, both in the United States and around the globe, had taken hold. By the early 1980’s, the name of the center had begun to appear in printed materials as “The Center for Civil and Human Rights.”