"The more one contemplates the essential oneness of humanity, our common hopes and dreams on this smallish planet, so hopelessly divided racially, culturally, religiously, and politically, the more one hungers for moral leadership..." 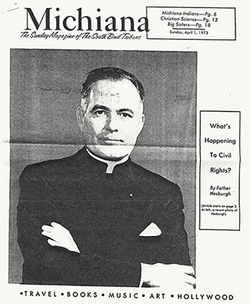 Shortly after President Richard Nixon requested his resignation from the U.S. Commission on Civil Rights in 1972, Rev. Theodore M. Hesburgh, then president of the University of Notre Dame, made a case for the renewal of moral leadership. In a boldly articulated statement of April 1973, Fr. Hesburgh asserted that such leadership must be grounded in a deep concern for the powerless.

Fr. Hesburgh may have been reflecting on his own university and its mission, for the next year he founded a center at Notre Dame dedicated to these principles. After 15 years of reflection and research on civil rights as Commissioner and then Chairman of the U.S. Commission, Fr. Hesburgh founded The Center for Civil Rights as a place of learning to advance justice and dignity for all people.

“It is time to begin anew, perhaps with more realism and less naivete this time, to commit this country to be what it professes before all the world to be. If this means afflicting the powerful, the smug, the leaders who do not lead, the complacent, those who have never had it so well, so be it.” 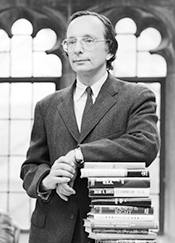 Early in its existence, the Center for Civil Rights became part of Notre Dame Law School. This reflected Fr. Hesburgh’s belief that our highest aspirations should be enacted in concrete terms, by changing the legal structures that shape opportunities. To this end he brought with him from Washington not only the papers and books related to the civil rights struggle in America – a struggle that he and the Commission had in no small way helped fight – but also Howard Glickstein, the U.S. Department of Justice attorney who had worked as Staff Director of the U.S. Commission on Civil Rights.  Installed as the Center’s first director, Glickstein helped Fr. Hesburgh secure funding from the Ford Foundation to establish the Center.

The Center’s early history reflects Glickstein’s expertise. From events focused on timely civil rights issues to legal briefs submitted in support of progressive causes, Fr. Hesburgh’s impassioned plea to “begin anew” found an active proponent in Glickstein. In its first year the Center sponsored a major conference commemorating the 20th anniversary of Brown vs. Board of Education, which included a lecture by Sargent Shriver, former director of the Peace Corps; submitted a brief to the United States Supreme Court in support of racially equitable admissions policies in law schools; and established a civil rights library, founded upon Fr. Hesburgh’s materials from the Commission.

“…to secure the dignity of human beings more is required than political and civil rights…too often we have been dealing with social and economic issues as problems, as the discharge of minimal responsibilities to take care of the needy…This is too narrow a view…”

By the time the Center was formally dedicated on March 22, 1974, Glickstein had formulated an ambitious set of priorities based on Fr. Hesburgh’s founding vision. The Center for Civil Rights at Notre Dame would: 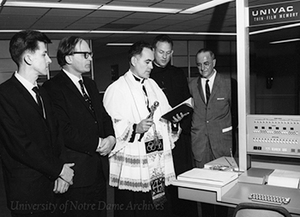 Fr. Hesburgh and the CRISIS system

At a major Center conference held in April 1975, entitled “Beyond Civil Rights: The Right to Economic Security,” participants strove to broaden the definition of civil rights to include economic, social, and cultural concerns. With an opening address by the Reverend Jesse Jackson, the conference set the tone for just the expanded vision of civil rights envisioned in the Center’s mission. At the same time, Glickstein also testified that year before the House Subcommittee on Civil and Constitutional Rights in defense of the extension of the 1965 Voting Rights Act, which was due to expire in August – a sign that no advance, regardless of how seemingly basic, was to be taken for granted.

In these and other areas, the Center contributed to civil rights advocacy. From contributing to hearings on the rights of migrant workers to filing briefs in support of anti-discriminatory hiring practices; from submitting briefs to the U. S. Supreme Court in an important Chicago housing segregation case to helping organize public hearings on local police misconduct, the Center engaged a diverse set of legal issues embracing a wider vision of what constitutes civil rights. 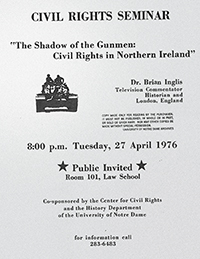 The publication in 1976 of a volume arising from the “Beyond Civil Rights” conference capped the first phase in the development of Fr. Hesburgh’s center. Events that year spoke to broadening concerns, from issues revolving around Vietnam War draft offenders and the effects of the Ford clemency program, to a talk presaging the concerns of the internet age, “The Right to Privacy in a Technological Society.” Perhaps most tellingly, in April of 1976 a seminar was held on the subject of civil rights in Northern Ireland, a clear indication that the scope of the Center’s concerns was broadening to embrace the rights of those around the globe. By June of 1976, the Center had published the first of what would eventually become a two-volume bibliography on International Human Rights. Fr. Hesburgh’s dream of providing moral leadership for the world seemed to be taking root at Notre Dame.

Next: Promoting Civil and Human Rights