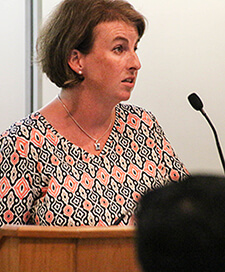 CCHR Director Jennifer Mason McAward discussed mass incarceration and criminal justice reform at a recent Federalist Society event at Notre Dame Law School.  She responded to the comments of William Otis, an opponent of such reforms.

As incarceration rates have risen and crime rates have fallen, the question is whether there is a causal link between the two phenomena.  Several empirical studies have demonstrated that increased incarceration does not in fact reduce crime, and there has been recent bipartisan agreement in favor of criminal justice reform.  Pointing to high recidivism rates, Mr. Otis challenged this conventional wisdom and argued that reducing incarceration rates will in fact lead to more crime and hidden social costs.  In his view, conservatives who support criminal justice reform suffer “forgetfulness, complacency, and shortsightedness.”

Prof. McAward discussed some of the costs of mass incarceration, from $80 billion in annual expenditures to the toll on families.  She pointed to a “real-time experiment” in criminal justice reform that appears to allay some of Otis’s concerns:  In twenty-eight states that have reduced their prison populations in the last decade, twenty-seven also saw a substantial decrease in crime rates.  Although their perspectives differed, McAward and Otis both encouraged students to continue to educate themselves about the important issue of mass incarceration and criminal justice reform.

Prof. McAward’s response was given at the invitation of Mr. Otis and the Federalist Society at Notre Dame Law School.