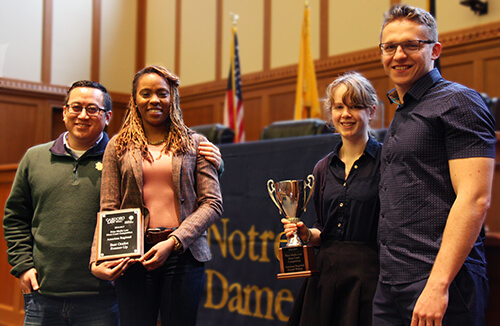 Four members of the LL.M. Program in International Human Rights Law competed in the Americas regional round of the Price Media Law Moot Court Competition at Cardozo School of Law in New York this January. Competing against teams from across the hemisphere, the team emerged as winners of the regionals and will now go on to represent Notre Dame in the International rounds in Oxford, England.

The Notre Dame team - Martins Birgelis (Latvia), Rachana Chhin (US), Ruth Cormican (Ireland), and Jodi-Ann Quarrie (Jamaica) - prepared for the competition with the help of their coach, Prof. Paolo Carozza.

The Price Media Law Moot Court Competition was founded in 2008 and focuses on international law governing freedom of expression. At issue in the 2016-17 competition are the complex relationships between the rights and responsibilities of individual speech, the role of internet-based communications corporations, and the jurisdictional authority of state actors.

The decision to compete in the Price Media Law competition was based, according to the team, on both the substance of these issues and the opportunity to expand their knowledge of international law. “The Price Moot focused on media and freedom of expression in the international context, which was perfect for us as students in the LL.M. Program,” according to Chhin. “The multi-jurisdictional competencies of our team, which included the European, American, and Inter-American systems, provided the opportunity for us to teach each other about how freedom of expression was regulated in various parts of the world.”

Preparation for the competition was rigorous, and involved not only the team but also their classmates and NDLS faculty, says Cormican. “Starting last August, we met together as a team two to three times a week to analyze the case and discuss our arguments. We also met regularly with our coach, Professor Carozza, and other members of faculty to practice oral arguments. Each of us worked individually on our assigned issues for the written memorial and oral arguments. Even over the Christmas holidays, we continued to work on our written submissions right up until the deadline.”

Given the stress of preparing for the competition while maintaining a grueling class schedule, each member of the team found his or her own reasons for committing to the endeavor. For Birgelis, a seasoned moot court competitor, the process revealed more than their own individual capabilities. ”Four people from different parts of the world came together under the flag of one university, demonstrated values that Notre Dame embodies, and came out victorious,” he said. “I think we were able to learn much more about human rights law, advocacy, and teamwork than we could otherwise.”

“I will always remember the hustling to get to the competition and even days before, not being sure that we were going to go,” recalls Quarrie, who was also named Best Speaker Runner-up for the competition. Yet their perseverance paid off. “The moment I carry from the experience is walking through Washington Square, with the trophy, on our way to collect our things and go the airport,” she continues. “There we see a guy with a full-sized piano playing beautiful music, and another man drawing in chalk on the pavement next to him. It was like the credits of an amazing movie about a team that didn't think they could win.”

The International round is scheduled to take place April 3-7 in Oxford.