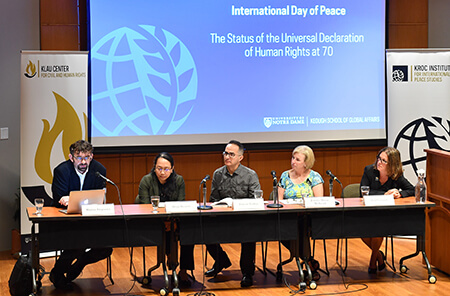 Jennifer Mason McAward, director of the Klau Center for Civil and Human Rights, and Diane Desierto, Associate Professor of Human Rights Law and Global Affairs, took part in a conversation about the status and legacy of the Universal Declaration of Human Rights on Friday, September 21, 2018.

The Kroc Institute for International Peace Studies, with the co-sponsorship of the Keough-Naughton Institute for Irish Studies and the Klau Center, observed the U.N. International Day of Peace with two days of events capped by the panel. Also taking part were filmmaker Maurice Fitzpatrick (“In the Name of Peace: John Hume in America”) and Ernesto Verdeja, Associate Professor of Political Science and Peace Studies and Klau Center Faculty Fellow.

The seminal document under discussion was passed by the United Nations following the Second World War and was intended to be the statement of a universal set of rights, enjoyed by all peoples and meant to ensure the dignity of each individual. Though forged out of compromise and already contentious at its signing, the UDHR remains a cornerstone of the international human rights structure still in place today. The panelists gathered in Notre Dame’s Hesburgh Center sought to examine both the Declaration's particular history and its enduring legacy.

A powerful tool for political reform 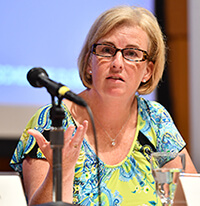 Addressing connections between the international human rights document and contemporaneous civil rights struggles in the United States, Jennifer Mason McAward located within the battle for international recognition of rights a powerful political tool for those seeking civil rights at home. “When the Universal Declaration of Human Rights articulated, in a more fulsome way on the international stage, the same promise of equality made by the U.S. constitution,” she explained, “civil rights advocates saw an opportunity to use the debate and adoption of the Universal Declaration to pressure the American government to live up to its own promises.” Rather than relying directly upon the UDHR – which was in any case unenforceable – leaders used its passage to apply international pressure by petitioning the U.N. body to recognize discrimination in the U.S. The international exposure gained by these petitions is generally acknowledged to have influenced President Truman in establishing, in 1946, the President’s Committee on Civil Rights, which released a set of recommendations for reform the following year. “Were it not for the Truman Administration’s sensitivity to pressure derived from the international human rights debate, it’s not clear that these domestic reforms would have been on the table at all.” 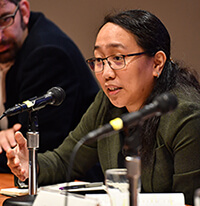 Turning to considerations of the UDHR’s legacy in current human rights discourse, Philippines native Diane Desierto began by claiming a specific and important perspective. “I probably look at the Universal Declaration of Human Rights somewhat differently from the fact that I do come from the global south,” she said, “and in the global south….the UDHR is a legally binding document….without needing to resort to any other constitutional norm, we have used it repeatedly as the basis to constrain government action.” Desierto went on the elaborate on this “transformative internalization” of the UDHR, including the potential misuse of the document’s language of rights.

Pointing to the rise of strongman governments, she identified a co-option of human rights language to defend the worst abuses. “There is a constant law-based justification for their imposition of measures that ordinarily would be so repugnant and repulsive to all of us,” Desierto observed. “We see these strongman leaders say ‘it’s part of our sovereign right, the fundamental right in the international system to provide human rights to our own peoples, and if our own peoples don’t want it, it should not be for anybody else to impose these rights.’”

“There’s a threat taking place to what we understand to be universality,” Desierto told the audience, “and it’s been taking place because even the UDHR, the language of it, is being deftly co-opted by many regimes today.”