The event took place in Hong Kong on November 2 at The Who's Who Legal Global Arbitration (Future Leaders in Arbitration Conference). The session explored the use of arbitration as a mechanism for resolving disputes in emerging contexts, including the environment, climate change, and human rights. Of particular interest for the panel was the use of arbitration as an alternative to the proposal of the IBA Task Force on Climate Change Justice and Human Rights to establish an International Court for the Environment.

Recent reports on the accelerated pace of climate change make such issues even more critical, says Desierto. "The October 2018 IPCC report stressing our 12 year window to reach climate change targets is a game-changing critical decision point in many ways," she explains. "Many of our ongoing environmental disputes at the Permanent Court of Arbitration already deal with climate change consequences.  But I do expect a more direct resort to inter-State abitration of climate change disputes between low-lying islands faced with rising sea levels (such as Kiribati, Marshall Islands, Nauru, among others), countries facing more hurricanes and natural disasters (such as the Philippines, Bangladesh, among others), against other countries who are parties to the UN Framework Convention on Climate Change (UNFCCC). Article 14 of the UNFCCC does provide for arbitration of disputes on the interpretation and application of this agreement.  I also expect possibly more mixed arbitration disputes (disputes between communities and States, individuals and groups and States) similar to the Urgenda v. Netherlands litigation - either to press for more government action to meet climate commitments and expedite mitigation measures, or to urge governments to better regulate and police the private sector over their own contributions to pollution and emissions."

"The October 2018 IPCC report stressing our 12 year window to reach climate change targets is a game-changing critical decision point in many ways." 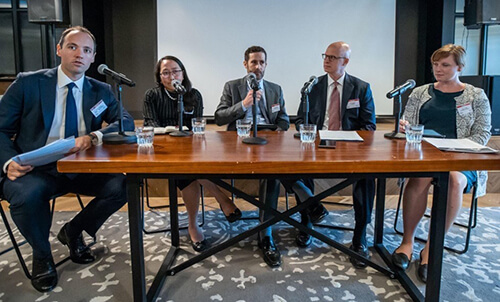 "With respect to human rights arbitration, this is also already a reality in international arbitration, she continues. "We have already seen one of the first models through the Bangladesh Accord, which enabled labor unions to directly sue textile companies through arbitration with the participation of the International Labor Organization and the state of Bangladesh.  At present, some UN Global Compact countries and other States who are parties to the UN Principles on Responsible Investment, are already exploring arbitration as a dispute settlement mechanism for human rights victims to obtain relief directly from the private sector. I am a Member of the Drafting Team of the Hague Rules on Business and Human Rights Arbitration, and we are at present working with various stakeholders now to finalize the draft rules alongside current business and human rights initiatives at the United Nations - that should, when adopted, enable human rights victims a separate opportunity to access a delocalized and internationalized form of justice against transnational corporations that fail to respect, protect, or fulfill human rights obligations of the States in which these businesses operate.  Arbitration, in this sense, may be preferable when human rights litigants face significant obstacles in local courts - particularly if transnational corporations are domestically powerful and able to delay court proceedings."

Desierto is active as lead/collaborating counsel in human rights and public interest-related economic disputes in the Philippines and Southeast Asia, including in matters successfully litigated before the UN Human Rights Committee and the Permanent Court of Arbitration, among many other bodies. Also appearing on the panel were Antony Crockett (Herbert Smith Freehills), Anya George (Schellenberg Wittmer), and Thomas Snider (Al Tamimi & Co.) Moderating the conversation was Tomas Furlong (Herbert Smith Freehills).