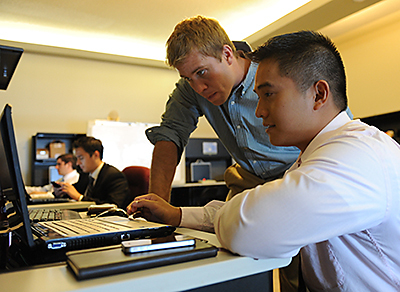 The Center for Digital Scholarship (CDS) at Notre Dame’s Hesburgh Libraries has partnered with The Center for Civil and Human Rights (CCHR) to develop a new online research tool. This searchable database will bring together documents from international human rights law and Catholic social teaching, enabling researchers to discover both convergences and divergences in the two bodies of thought.

The new partnership is expected to accelerate the project’s development and broaden its potential. According to Project Manager Christina Leblang, “The strong support of the CDS has allowed us to focus our financial efforts on the collaborative work of scholars in the fields of human rights and Catholic social teaching. Utilizing the expertise of such scholars will allow us to create a more thorough resource for users.”

The project was first proposed by Notre Dame Law School professor Paolo Carozza, former CCHR director and current director of the Kellogg Institute for International Studies, who recognizes the need for students of both human rights law and Catholic social teaching to be in dialogue. The benefit to teaching, according to Carozza, is clear. “It will contribute to in-class discussions by making it possible to examine instantaneously similarities and differences in norms without having to (re)do the necessary research each time and for each new issue. We can engage student questions on the spot,” Carozza explains. “It will also help enormously with facilitating the research necessary for students to write papers in various courses.”

Outside the classroom, the new research portal is intended to aid practitioners, advocates, public officials, diplomats, ministers, pastoral agents, and concerned citizens. Catechists might consult it to prepare educational talks on social justice and refugees in their parishes. Non-governmental organizations engaging in advocacy, or Vatican diplomats addressing the United Nations, could also benefit from the unique resources of this project.

The CDS was brought into the process from the project’s earliest stages, offering the generous support of its advanced data processing and archiving capabilities, as well as considerable logistic and financial support. As John Wang, Associate University Librarian at Hesburgh Libraries, explains, “The Libraries, on behalf of The Center for Civil and Human Rights, acquired five years of use rights for Vatican social teaching documents for the project. We plan to preserve them in CurateND, a digital repository, where scholars will be able to discover and access them.” Now that the project has reached its next phase of development, the CDS has taken on a partnership role and will also develop the user interface. The expanded relationship benefits both the research tool and the CDS. According to Wang, “This project particularly fits within the mission of the Center for Digital Scholarship by reason of its multidisciplinary nature and its potential to leverage state-of-the-art technologies to make new discoveries.”

Beyond fulfilling its core mission, the project also promises to advance the capabilities of CDS, which is tasked with expanding the University’s information systems. “This project will experiment with automating the processing of historical documents,” says Wang. “We hope it will shed light on the creation of best practices and methodologies of text mining for many disciplines.” Leblang notes the expanded capabilities she expects CDS expertise to bring. “With the collaboration of the CDS, we are now able to create a living research database that will be sustained through the combined efforts of the CCHR and CDS for years to come,” she says. “The CDS has opened possibilities of utilizing various textual tools previously not considered. These tools will not only allow for a more exhaustive review of the texts but will also incorporate methods for generating related search terms, increasing the likelihood of discovering even more relationships previously overlooked.”

Leblang estimates that an initial version of the online tool may be rolled out as early as Fall 2015, and will be tested by focus groups consisting of faculty, students, and practitioners from both fields. A fully functioning public version is anticipated by Summer 2016.

The project has received support from the Institute for Scholarship in the Liberal Arts and the Kroc Institute for International Peace Studies. More information may be found at humanrights.nd.edu/csthr.