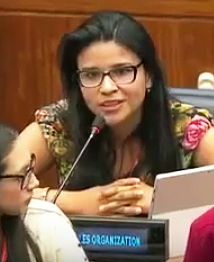 Linda Manaka Infante, a Venezuelan lawyer and 2016 graduate of the LL.M. Program in International Human Rights Law, spoke before the Permanent Forum on Indigenous Issues at the United Nations this May. The session was built around the theme “Indigenous peoples: conflict, peace and resolution.”

Ms. Infante has a particular interest in the rights of indigenous peoples, representing victims of human rights abuses before national courts and international human rights mechanisms, including both the Inter-American and United Nations systems. “When given the chance to speak at the Forum on Indigenous Issues,” Ms. Infante said, “I denounced problems in Venezuela like the disappearance of indigenous languages, including Baniva - my own language; the poisoning of Amazonian rivers with mercury by the illegal miners; and the hundreds of contracts the Government has signed with transnational companies to operate in indigenous territories without consulting with the indigenous peoples affected.”

More on the UN forum can be found here. Ms. Infante’s address can be viewed below.