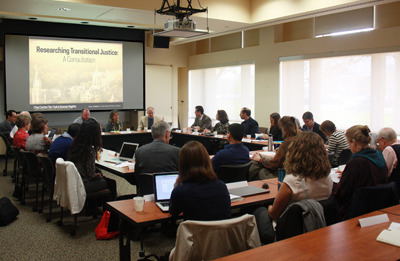 As it  launches a new course in human rights research, The Center for Civil and Human Rights convened a day-long consultation on transitional justice designed to help chart that course.

On May 5, 2014, CCHR hosted the open forum with the support of the Kroc Institute for Peace Studies. Director Daniel Philpott expressed his particular vision for CCHR’s research agenda – the role of civil society agents in restoring peace and stability to societies torn by violence. “I am hopeful that CCHR will identify a research agenda in transitional justice that will make a difference in the world,” Philpott said. “Often overlooked in transitional justice research is the eclectic and often surprising set of actors whose message and methods often elude traditional narratives of justice.”

Joining an assembly of more than 40 scholars from the Notre Dame community were five invited guests whose expertise in transitional justice helped shape the discussion: Cristian Correa from the International Center for Transitional Justice; Melanie Greenburg from the Alliance for Peacebuilding; Jason Klocek from the University of California, Berkeley; Jennifer Llewellyn from Dalhousie University, Nova Scotia; and Graeme Simpson from Interpeace.

The resulting discussions encompassed issues of possible research foci, funding and logistics, and the important distinctions that may be made between traditional, legally-based approaches to transitional justice and more broadly-defined peacebuilding activities. This new research initiative builds upon CCHR’s long history of involvement in transitional justice through the education of human rights lawyers, and is intended to deepen that involvement through a broad, multidisciplinary approach.