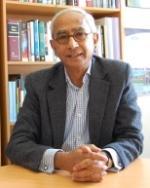 Vinodh Jaichand ‘88 LL.M.,’96 J.S.D. began to study law because the South African thought it could be a tool for dismantling the system of apartheid. But after he arrived at the University of Notre Dame, he realized that the law may well be part of the problem.

“I had received the Bradlow Foundation Scholarship for postgraduate study,” explains the former Deputy Director of the Irish Centre for Human Rights. “When I came I began researching the [Fr. Theodore] Hesburgh Papers and was struck by the similarities between our two countries and race relations.” These papers, a record of Fr. Hesburgh’s tenure on the U.S. Civil Rights Commission, were housed at Notre Dame Law School’s Center for Civil and Human Rights, founded by the university president in 1973.

Jaichand completed his LL.M. in international human rights law in 1988, a member of the inaugural class at CCHR. Armed with the belief that change needed to occur in his homeland, Jaichand went back to South Africa in 1989 to deliver a Bradlow Foundation Lecture. His topic: The black right to vote.

“I remember [former NDLS] Dean David Link and [former University] Provost Timothy O’Meara came over to support me,” the humble Jaichand says. “It was a really contentious subject as you can imagine because you couldn’t talk about black rights without invoking all kinds of political considerations. Just before I entered the lecture hall, Provost O’Meara commented, ‘Vinodh, you realize you are the only black person here.’ That really struck me. I hadn’t thought about what I was about to do. But to Notre Dame’s credit, they didn’t just back me with a sound education, they backed it up by physical presence at my first lecture. This heartened me and I was very grateful for the support of these very prominent people.”

Jaichand has been involved in human rights issues and education for over twenty-three years. During that time he earned his J.S.D in international human rights law from CCHR, and his work has included serving as the National Director of Lawyers for Human Rights in South Africa as well as publishing three books and numerous journal articles. His body of work has led him to the esteemed position of Head of the Oliver Schreiner School of Law at the University of Witwatersrand (Wits), Johannesburg, where he has just completed his first year. As the first black male to hold this position, Jaichand is acutely aware of its prominence as well as its challenge. “Nelson Mandela attended this institution and this is both inspiring and intimidating.”

In his current position as Head of the School of Law, one of Jaichand’s first initiatives was to take on how the university educates future lawyers. None of the other 16 law schools in the country require students to hold a prior degree before receiving an LLB. “Post-apartheid efforts were directed toward getting as many people educated as possible,” explains Jaichand. “It was with the best of intentions of course. But we realized the students were not as prepared to examine the larger issues of the law or of life. I have proposed that we move away from the accepted path and require the prior degree before the law degree.” Given two years to introduce and gain support for the idea, Jaichand completed it in nine months. The new system will begin with the 2015 term at Wits University.

“I want to also include a legal research and writing course as well as an ethics course in this new curriculum,” Jaichand says. “I well remember the ethics classes at Notre Dame and know how important it is to provide students with the ethical underpinnings of why we do what we do. We need to give our students a framework to rely upon.”

Jaichand is proud of his Notre Dame law degrees, calling the University his “home away from home.” He also asserts that the value of a Notre Dame degree in the world is “extremely high, far higher than I think Notre Dame fully understands.” He continues to be inspired by the quality faculty at NDLS and their model of student engagement. “I am, and always will be, proud to call myself a Double Domer.”

Portions of this story were contributed by CCHR.