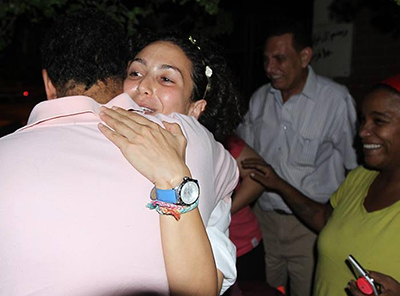 Center for Civil and Human Rights alumna Yara Sallam, LL.M. ’10, who has been in a Cairo jail cell since June 2014, was pardoned today by Egyptian President Abdel Fattah el-Sissi and is now home with her family.

Sallam, a human rights lawyer and researcher working for the Egyptian Initiative for Personal Rights, was arrested in June 2014 along with 22 other opposition activists, and charged with defying a law on unsanctioned protests. Sallam denied taking part in the protests. She has long worked to defend the rights of women to engage in peaceful protest in Egypt, work that earned her the 2013 North African Human Rights Defenders Shield Award.

A graduate of the CCHR-supported LL.M. Program in International Human Rights Law, Sallam is one of more than 350 human rights lawyers from over 90 countries around the world to have graduated from the Notre Dame Law School program.

"Yara excelled as a student at Notre Dame," said Sean O'Brien, director of the LL.M. program. "But it is her courageous commitment to human rights and her generous attentiveness to the suffering of others that makes her a model for all Notre Dame lawyers. We joyfully join her family and friends in celebrating her freedom."