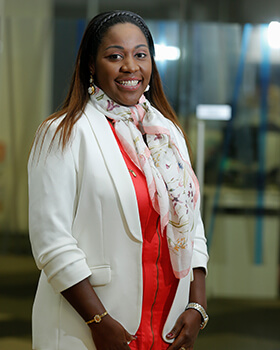 Xiomara Cecilia Balanta Moreno, a 2012 graduate of Notre Dame's LL.M. Program in International Human Rights Law, is among the 51 judges recently appointed to the Special Jurisdiction for Peace, a key tribunal crafted to further the Colombian peace process. Balanta, an Afro-Colombian law professor with a doctorate in law from the Universidad Rey Juan Carlos, will be responsible for investigating, determining guilt, and imposing punishment in cases of major human rights and humanitarian law violations committed in connection with the armed conflict in Colombia.

As reported by Thomson Reuters, more than half of the judges appointed will be women, a significant move toward giving women a voice in the peace building process. "The top courts have been a restricted space for women, especially for Afro-Colombian and indigenous women," the agency quotes Balanta as saying. “We're properly prepared to participate…this is a historic moment.”

Sean O'Brien, director of the human rights LL.M. program and Balanta's professor, celebrated her appointment. "From her years as a human rights defender in Cali, to her study of transitional justice at Notre Dame and her post-graduate internship at the Inter-American Court of Human Rights, Xiomara has spent more than a decade preparing herself for this role in her country's future. We could not be more proud of our association with our esteemed graduate."

Also selected as a judge was Pedro Elías Díaz Romero, who served as a visiting fellow at Notre Dame's Center for Civil and Human Rights in 2001. Díaz has worked as a human rights specialist for more than 20 years, including as a human rights prosecutor in Colombia, an attorney at the Inter-American Commission on Human Rights, and as a lawyer at the Universidad Externado in Bogotá.

Former NDLS professor and director of the CCHR, Juan E. Méndez, was part of the five-person selection committee, as was Diego García-Sayán, who served as both Peru's minister of justice and minister of foreign affairs, was past President of the Inter-American Court of Human Rights, and was visiting fellow at the Kellogg Institute in 2014.