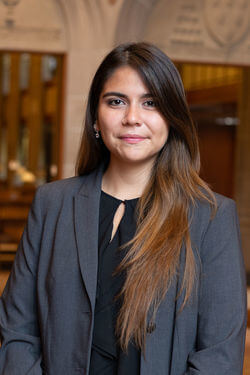 Carmen López obtained her law degree from the University of San Pedro Sula, Honduras. Her interest in fighting violence and forced migration in Honduras began with the military coup in 2009. Since then, she has been involved in the training and promotion of human rights in NGOs, social movements and international institutions. Between 2011-2015 she was a co-founder of human right’s education initiatives for young women and led the National Assembly of Feminist Women in 2015. Ms. López completed a CEDAW for Change international course at the University for Peace in Costa Rica. In 2016, she presented civil society’s alternative report at the CEDAW Committee’s 65th Session in Geneva. Most recently, Ms. Lopez has worked as a legal advisor at Fundación para la Justicia y el Estado Democrático de Derecho, accompanying families of Honduran migrants who have been executed or who are disappeared. 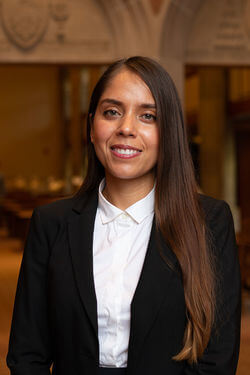 Isabel Anayanssi Orizaga Inzunza obtained her law degree from the Autonomous University of Baja California in 2014, where she was awarded for her academic excellence. She also received the Youth Award for academic performance, given by the Governor of Baja California. Ms. Orizaga was a Visiting Professional at the Inter- American Court of Human Rights in 2014. From 2015 to 2017, Ms. Orizaga worked as a researcher assistant for Judge Eduardo Ferrer Mac-Gregor Poisot in the Institute of Legal Research of the Universidad Nacional Autónoma de México. During that time, she researched international standards regarding violence against women, as well as forced disappearances. Most recently, Ms. Orizaga worked at the National Human Rights Commission - Mexico. She is co-author of the International Bar Association Human Rights Institute’s study on forcibly disappeared persons.

"We are immensely grateful to Joe for his foresight and generosity in establishing this scholarship fund," says Sean O'Brien, Director of the LL.M. Program in International Human Rights Law. "Thanks to Joe -- himself a "Double Domer" -- the careers of these impressive young human rights lawyers and the trajectory of human rights in the Americas will be marked by the distinctive Notre Dame education that he helped to make possible for them."