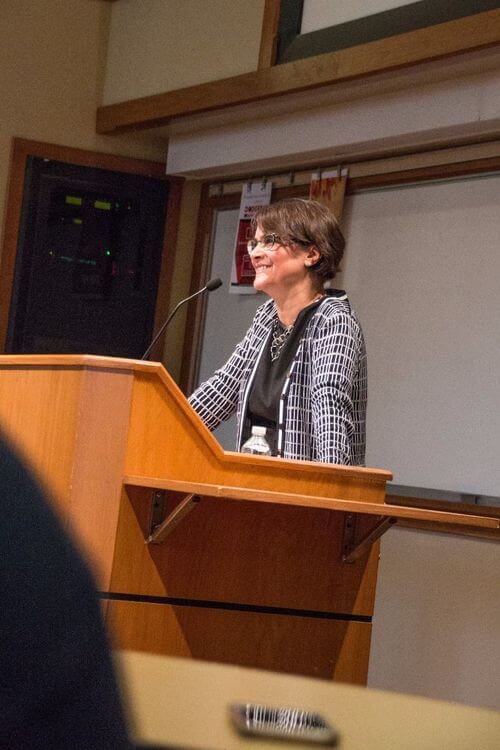 Jones, who was recently appointed the Society of Black Alumni Presidential Professor and Professor of History at Johns Hopkins University, spoke as part of the Dean’s Lecture on Race, Law, & Society series, co-sponsored by the Center for Civil and Human Rights. Her presentation, “Birthright Citizens: Winners and Losers in the Long History of the 14th Amendment,” focused on the topic of her forthcoming book.

She began her talk not with the past, but with the present: the ongoing story of 23-year-old Maria Garcia Juarez.

Juarez was just 8 months old when her Mexican mother brought her to America. She was raised in the United States, and the United States was the only country she knew until May, when she was deported to Mexico from her home in Detroit. Juarez didn’t qualify for the Deferred Action for Childhood Arrivals Act – known to many as DACA – because she stole two cars when she was 17 years old.

Her American husband and 2-year-old child remain in Michigan.

“Her story of separation, loss, fear, and estrangement is but one amidst a humanitarian crisis for unauthorized Americans,” Jones said, “a crisis of the birthright provision, one that is often held out to be exceptionally robust, but cannot reach or resolve.”

Jones pointed to Reconstruction, the short period after the Civil War, as a “sea change” of politics, opinions, and federal power in America – birthright citizenship perhaps the farthest reaching and most hotly contested among them. “Jus soli,” translated as “right of the soil,” was part of English common law for a long time, but it didn’t become part of American culture until it was enshrined constitutionally via the 14th Amendment.

“Many of us, many 21st century Americans, take for granted how birth literally bestows upon them and their children citizenship, even as today most of the world limits the effect of ‘jus soli’ principles,” Jones said.

Though constitutionally protected, birthright citizenship was contested in court cases for decades following its ratification. Jones highlighted cases of free African Americans and children of Chinese immigrants as examples.

The principles of the 14th Amendment are still debated now, in conversations about unauthorized immigrants who came to the U.S. as children through no fault of their own. The Pew Research Center estimated that in 2015, 11 million unauthorized immigrants called the United States home, roughly 3.4 percent of the country’s population.

“These men, women, and children have built families, homes, businesses across generations. Their labors are an engine of prosperity, especially in agriculture and the service sector,” Jones said. “Integral in the country in which they live, unauthorized immigrants have no access to the rights of citizens. They have no unassailable claim to place.”

The 14th Amendment may now be seen as “a shortcoming of our 19th century constitutional scheme,” Jones said. During the question-and-answer session after her speech, Jones elaborated and said that we risk the judgment of history if we don’t attempt to address this shortcoming. Programs like DACA are “a modest example” of bridging that gap for those who are a rich part of American communities but aren’t citizens or documented residents.

“With no path to citizenship, the 14th Amendment becomes a scythe that cuts across generations. Families of mixed status confront dislocation and separation as birthright slices through households, severing cross-generational ties,” Jones said. “It’s a haunted existence that produces lives subject to the arbitrary whims of politics and policy.”

For more information on Jones and her work, visit her website. Prof. Jones's talk can be viewed below.

This story was originally published by Notre Dame Law School on November 8, 2017.