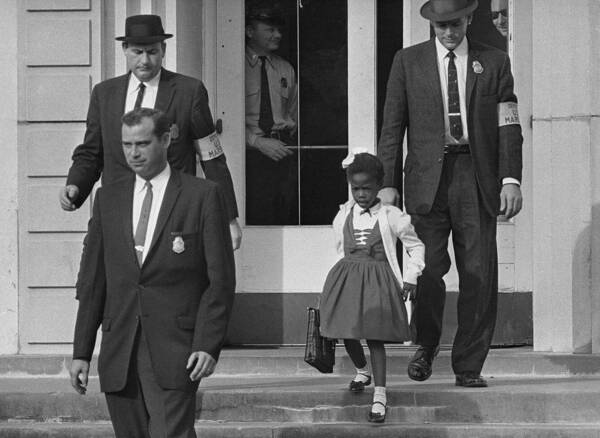 "Go where there is no path and begin the trail. When you start a new trail equipped with courage, strength and conviction, the only thing that can stop you is you!"

The Klau Center for Civil and Human Rights will host an intimate conversation with Ruby Bridges, an iconic figure in US civil rights history, and an inspiring figure in the ongoing struggle for racial justice. Ms. Bridges will speak as part of the Klau Center’s official dedication celebration on November 5, 2021.

You may attend this event in person or virtually. The event is free but ticketed. Please see below for further information.

Ruby Bridges was born in Tylertown, Mississippi on September 8, 1954 – the same year of the United States Supreme Court’s landmark decision in Brown v. Board of Education. That decision ended – at least in theory – racial segregation in public schools.

By 1960, most schools were still racially segregated despite the ruling. That year, 6-year-old Ruby became the first Black child to attend a public school in Louisiana when, escorted by federal marshals, she walked into the all-white William Frantz Elementary School.

As Ruby entered the building, nearby protesters hurled racial slurs. Parents immediately began withdrawing their children from the school, and ultimately forced Ruby to attend her entire school year in complete isolation, taught by the one teacher at the school willing to accept her as a student.

Immortalized in the Normal Rockwell painting from 1964, “The Problem We All Live With,” Ruby’s bravery in the face of racial resistance was only among the first steps toward educational parity. While in time more Black children would enroll in desegregated schools (in both southern and northern states), the challenge of true integration has not been fully met.

Ruby moved on from those difficult days of the early 60’s, to a life filled with the successes of work and family. In 1993, however, tragedy struck home when her youngest brother became a victim of violence. With a renewed dedication to social justice, Ruby began to volunteer at her alma mater, William Frantz Elementary School. Both the school and surrounding neighborhood had once again become racially segregated, plagued by increasing poverty and crime rates.

Inspired by her desire to help children achieve their hopes and dreams, the Ruby Bridges Foundation was established in 1999. The foundation began taking small steps to achieve a grand vision – to provide children with an equal opportunity to succeed. Appropriately the work began at Frantz, where the foundation started an after-school program featuring multicultural arts classes. Later, the "Ruby’s Bridges" program was developed to promote cultural understanding through community service.

Ruby now offers online reading workshops for children, hosts her own podcast, and speaks publicly. We are proud to present this conversation as part of our “Building an Anti-Racist Vocabulary” series.

To attend in person

In-person seats are now sold out for this event.

Unclaimed tickets will be distributed beginning at 12:15 p.m. the day of the event. While there is no guarantee of receiving a ticket, you are welcome to check at the DeBartolo Performing Arts Center box office at that time.

This event is part of our "Building an Anti-Racist Vocabulary" series. You may attend on Zoom by registering for the series below.

Note: If you are already registered for the series, you do not need to register again.

Register to attend on Zoom