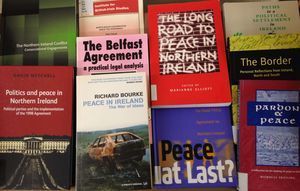 On this 20th anniversary of the signing of the 1998 Belfast 'Good Friday' Agreement, the United Kingdom is in the process of implementing its referendum decision to leave the European Union (EU). How will Brexit impact the 1998 Agreement and the peace it forged?

Daniel Mulhall, Ireland’s 18th Ambassador to the United States. Mr. Mulhall served as Ireland’s Ambassador in London during the referendum on Brexit. Previously, he served as Director-General for European Affairs for the Department of Foreign Affairs and Trade and as Press Counsellor for the Department as part of the Irish Government’s delegation to the Good Friday Agreement in 1998.

Kevin O'Malley,  American lawyer and diplomat. Mr. O'Malley was the United States Ambassador to Ireland from 2014-2017. Before assuming his post, he was a federal prosecutor and then a partner at Greensfelder, Hemker & Gale, P.C. in St. Louis, Missouri.