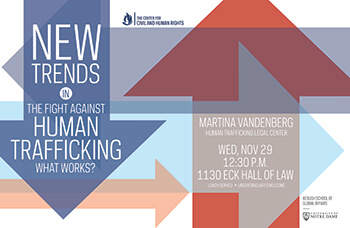 In 2017, the International Labour Organization released new forced labor estimates: 24.9 million people held in forced labor and servitude across the globe. Another 15.4 million were estimated to live in forced marriages. With numbers this large, it can be easy to succumb to despair. But there is hope. And progress. Martina Vandenberg will highlight new strategies that are working. From financial crimes investigations, to strategic litigation, to survivor leadership, to criminal restitution, to vacatur, there are new tools in the toolbox -- and new cases in the courts.

Made possible thanks to the generous support of the Pasquale Family Endowment for Excellence.

Martina E. Vandenberg is the founder and president of The Human Trafficking Legal Center (HT Legal). She has spent two decades fighting human trafficking, forced labor, rape as a war crime, and violence against women, and has represented victims of human trafficking pro bono in immigration, criminal, and civil cases. She has testified before the Senate Judiciary Subcommittee on Human Rights and the Law, the Helsinki Commission, the House Foreign Affairs Committee, and the House Armed Services Committee on an array of human rights issues. Through HT Legal, Vandenberg has trained more than 3,200 pro bono attorneys nationwide to handle human trafficking matters A former Human Rights Watch researcher, Vandenberg spearheaded investigations into human rights violations in the Russian Federation, Bosnia & Herzegovina, Uzbekistan, Kosovo, Israel, and Ukraine. She is the author of two Human Rights Watch reports, “Hopes Betrayed: Trafficking of Women and Girls to Post-Conflict Bosnia & Herzegovina for Forced Prostitution,” and “Kosovo: Rape as a Weapon of ‘Ethnic Cleansing.’”

A Rhodes Scholar and Truman Scholar, Vandenberg has taught as an adjunct faculty member at the American University Washington College of Law and at the Oxford University Human Rights Summer Program. Vandenberg is admitted to practice in New York and the District of Columbia.