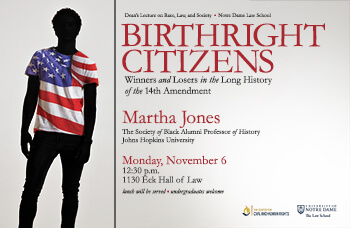 It is difficult to point to any moment during the past two centuries when the principle of birthright citizenship was not the subject of debate. The Reconstruction-era ratification of the Fourteenth Amendment, in this sense, is best understood as an important though not definitive moment in the history of birthright. The import and the limits of events in 1867–68 followed on the heels of antebellum debates over the status of free African Americans. And they were followed by continued uncertainty about birthright when, at the century’s close, questions plagued the children of Chinese immigrants because their parents were ineligible for naturalization. The Fourteenth Amendment largely resolved the citizenship dilemma former slaves faced. It did less well for the U.S.-born children of immigrants who, in the 1890s and today, face questions about where they are situated along the nation’s borders of belonging.​

Co-sponsored by The Center for Civil and Human Rights

Lunch will be served. Undergraduates welcome.

Professor Jones is the author of All Bound Up Together: The Woman Question in African American Public Culture, 1830-1900 (2007,) co-editor of Toward an Intellectual History of Black Women (2015,) and author of the forthcoming Birthright Citizens: A History of Race and Rights in Antebellum American (Cambridge University Press, 2017). Her articles have appeared in the Law and History Review, the Journal of the Civil War Era, the North Carolina Law Review, the American Journal of Legal History, and numerous edited collections. Professor Jones has held fellowships from the National Humanities Center, the National Constitutional Center, the Gilder-Lehrman Institute, the University of Pennsylvania Law School, and the Library Company of Philadelphia.