Centre for International Studies and Diplomacy  SOAS, University of London 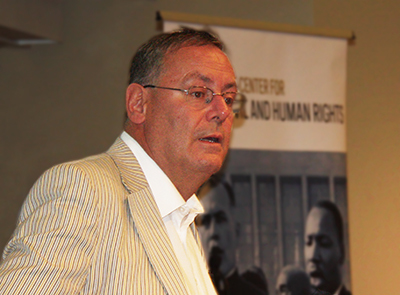 Presenting a document unseen for 70 years – a United Nations War Crimes Commission indictment of Adolph Hitler, dating from December 1944 – Dr. Dan Plesch begins his review of a largely forgotten chapter in human rights history. This seemingly modest scrap of typewritten paper that looks, Plesch quips, “like a traffic ticket for war crimes,” serves as introduction to the extensive U.N. mechanisms, in force long before the famed Nuremberg trials, that sought to define and prosecute crimes against humanity during the Second World War.

Plesch begins his narrative by recalling the meeting between Winston Churchill and Franklin Roosevelt during Christmas 1941 in which the leaders conceived of a strengthened coalition of global partners dubbed the “United Nations.” Key to this episode, for Plesch, was the inclusion of both China and India as member states. Later that winter, when exiled leaders of the occupied European countries call for a united stand against war crimes and the establishment of international law to govern their prosecution, China and India sign on in support while Great Britain and the U.S. remain ambivalent. Similarly, the two Asian countries later support a European call for investigation into Nazi extermination of Jews, providing pressure for Churchill and Roosevelt to make statements on the issue.

What follows is the story of a robust wartime commission grappling with war crimes in Europe, Africa, and the Pacific, one that will eventually set up war crimes tribunals handing down over 36,000 indictments resulting in at least 2,000 trials and 10,000 convictions. Running contrary to the canonical historical narrative, Plesch reveals a multinational effort to address human rights abuses throughout the world prior to the postwar tribunals, one in which Asian agency played a major role, ultimately defining crimes against humanity as a category of international crime. “Nuremberg is presented as the beacon, a lone source of light on these issues,” Plesch argues. “Rather I would say one should regard it as a jewel in the crown, of a much wider and richer range of work, at the time, on war crimes.”

Dan Plesch’s visit to Notre Dame was sponsored by the Liu Institute for Asia and Asian Studies and The Center for Civil and Human Rights. His full presentation can be viewed below.

Dan Plesch is the author of Human Rights After Hitler: The Lost History of Prosecuting Axis War Crimes. His previous publications include: America, Hitler and the UN, Wartime Origins and the future UN (with Prof.Weiss) and The Beauty Queen's Guide to World Peace. He directs the Centre for International Studies and Diplomacy at SOAS, University of London, a graduate school. Previously he held positions at the Royal United Services Institute and the Universities of Birkbeck London, Keele and Bradford. He has his PhD in Political Science from Keele and BA in History from Nottingham.