This story was originally published in The Observer by Sofia Madden. Photo by Katelyn Valley. 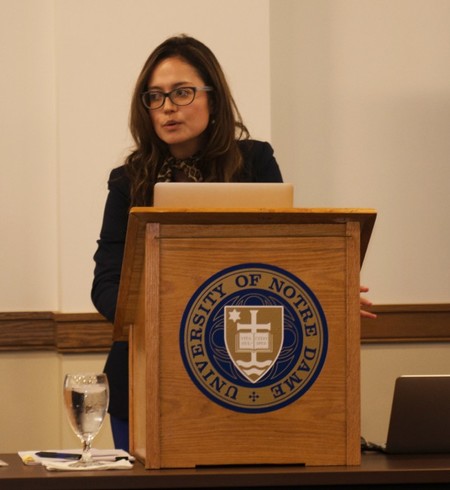 Thana Cristina de Campos, adjunct professor of law at the University of Ottawa, spoke on the ethical issues and responsibilities surrounding the global health crisis in Nanovic Hall on Wednesday, August 31, 2017.

Specifically, she discussed forging a new intellectual path to understanding the ethics of the health justice system, striving to find a solution to the most neglected diseases in the world, including Malaria, Zika and Ebola. “I would like to investigate the ethical responsibilities that we have,” De Campos said.

To do this, she explicated a chapter of her newly published book, titled “The Global Health Crisis: Ethical Responsibilities.” In summarizing her book, she examined the major problems surrounding a long-term solution to the global health crisis. “The problem is two-fold,” de Campo said. “There is an inaccessibility to medical knowledge, and there is an inaccessibility to medical treatment.” Based on this two-sided problem, de Campo questions who holds the largest responsibility for this health crisis. She scrutinized pharmaceutical companies and their property rights. “In the context of the global health crisis, certain responsibilities lie only on pharmaceutical companies … because they are the owners of a special type of property,” de Campos said.

The property she refers to is intellectual property, or the medical knowledge, pharmaceutical companies own, but fail to disclose to the public. She proposed that these rights to intellectual property must be altered in order to absolve neglected diseases around the world. “The right to private property pharmaceutical companies hold is limited when tasked with solving this crisis,” de Campo said.

In proving this point, De Campo analyzed property rights on a theoretical level, which she translated into concrete terms in order to prove why pharmaceutical companies have an ethical responsibility to disclose certain pieces of vital information about their medical knowledge. “I will begin by exploring the purpose of intellectual property rights and exceptions to these rights,” de Campo said.

She accomplishes this by analyzing three diverse schools of thought. By highlighting the views of Thomas Aquinas, John Locke and Robert Nozick, she sets forth three highly regarded, yet alternate, stances about the rights and limitations of property ownership. “While these three intellectual views of property rights differ, I have found a common ground in all of their proposals,” de Campo said. All three perspectives settle on the common agreement that the only exception to releasing an individual’s right of property comes with a catastrophic event that could propagate a need for communal access to this property. “All three arguments agree that a catastrophe could lead to an exception of holding individual property rights,” de Campo said.

Utilizing this common ground, de Campo claimed that there are exceptions to pharmaceutical property rights, specifically in the case of a catastrophe. “Certain pharmaceutical property rights are limited in the case of certain public health properties,” de Campo said. “These limitations are shaped by their ethical duty,” de Campo said. Studying events that have been labeled as “catastrophic” in the past, de Campo cites the earthquake and tsunami in Japan in 2011, as well as the bombing of Hiroshima and Nagasaki in 1945, both resulting in thousands of deaths. “With 2 million deaths, the global health crisis also must qualify as a catastrophe,” de Campo said.

De Campo argued that because the global health crisis is a catastrophe, pharmaceutical companies have an ethical responsibility to share their intellectual property and medical knowledge of these diseases. “In the context of this common ground, this means the companies need to disclose only those medical patents vital to controlling or absolving the global health crisis,” de Campo said.  She refined her appeal to the pharmaceutical industry by defining their duties for world health as limited and very specific.

“I’m not arguing that we should have all access to all medical knowledge, all medical innovation or research … rather that its specific nature helps a specialized portion of the world’s population,” de Campo said.

Dr. de Campos' visit to Notre Dame was sponsored by The Center for Civil and Human Rights.
Her full presentation can be viewed below.