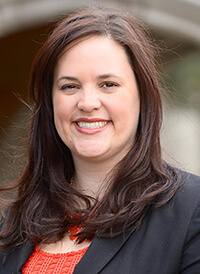 On Friday, April 21, Dr. Meghan Clark, Assistant Professor of Theology and Religious Studies in Moral Theology at St. John’s University, spoke in Andrews Auditorium on the themes of dignity and sustainable development within the context of Catholic social teaching.

Clark began with an investigation of dignity as a basis for human rights. While central to the human rights discourse, she pointed out that its definition is usually left vague at best, and usually avoided altogether. She then probed Catholic social teaching for possible signposts toward an understanding of the concept. Fundamental to the question, she said, was the duality of the term: is dignity to be understood as an inherent quality of each person, or is it the effect of social conditions, conditions essential for the flourishing of the individual?

Clark turns first to Pope Francis and Laudato Si, where the inherent and conditional sources of dignity are joined. Francis insists that the struggle for social justice (conditional dignity) is essential because many are as yet unable to live in a manner worthy of their (inherent) dignity. CST therefore offers the insight that development of the community points toward the possibility of the individual becoming more fully human, more able to express inherent dignity. Significantly for Clark, this formulation also reveals that dignity is communal, which points toward the key notion of solidarity.

Tracing the idea of solidarity through the teachings of Paul VI and John XXIII, Clark concludes: “This sense that we have a profound obligation to promote the human rights and flourishing of others, as part of the common good, is also where, in Catholic social teaching, we get the sense of a right to development. My own substantive exercise of my human rights is contingent on my striving for the substantive exercise of those rights by each and every individual in the community.” The dignity of the individual is thus intricately bound up with the dignity of the community.

The address was keyed to the launch of Convocate, CCHR’s new research database connecting CST and international human rights law. Following the lecture CCHR and the Hesburgh Libraries publicly launched the platform. An account of the event can be found here.

Dr. Clark’s lecture was co-sponsored by the Center for Social Concerns, and can be viewed in its entirety below.