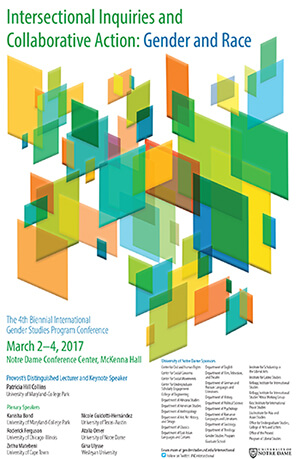 The Intersectional Inquiries conference will offer a platform for scholars, artists, and activists from various fields to investigate the intersections of race and gender from a broad range of historical and geographic viewpoints. Participants will attend to the ways that race structures our ideas about gender, sexuality, class, and disability, and explore the still-dominant power of biopolitical violence and imperialism. Participants will also ask how racialized and other non-normative identities challenge established social hierarchies.

Professor Collins is Distinguished University Professor and Wilson Elkins Professor of Sociology at the University of Maryland, College Park. A pre-eminent black feminist scholar and theorist of intersectional identities, Professor Collins recently co-authored Intersectionality (Polity 2016) with Sirma Bilge. Her first book, Black Feminist Thought: Knowledge, Consciousness, and the Politics of Empowerment (Routledge 1990), won the Jessie Bernard Award of the American Sociological Association for significant scholarship in gender, as well as the C. Wright Mills Award of the Society for the Study of Social Problems. Professor Collins is the author and editor of several other books dealing with race, gender, education, and politics, including On Intellectual Activism (Temple 2012); Another Kind of Public Education: Race, the Media, Schools, and Democratic Possibilities (Beacon 2009); and From Black Power to Hip Hop: Racism, Nationalism, and Feminism (Temple 2006).

"Intersectionality or Diversity? Transforming the Neoliberal Academy in the Era of Black Lives Matter."

"Biopolitics and Borders: Intersectional Bodies and the Globalizing of Nation."

More Information on the conference can be found at genderstudies.nd.edu/intersectional