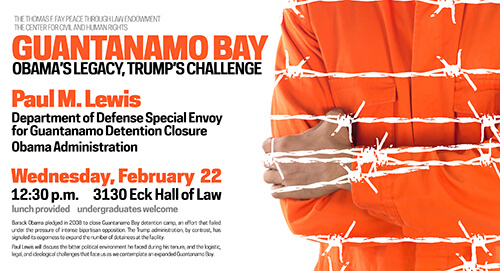 Barack Obama pledged in 2008 to close Guantanamo Bay detention camp, an effort that failed under the pressure of intense bipartisan opposition. The Trump administration, by contrast, has signaled its eagerness to expand the number of detainees at the facility. Paul Lewis will discuss the bitter political environment he faced during his tenure, and the logistical, legal, and ideological challenges that face us as we contemplate an expanded Guantanamo Bay.

Presented with the support of the Thomas F. Fay Peace Through Law Endowment for Excellence and The Center for Civil and Human Rights. 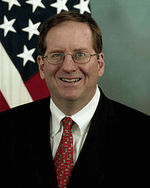 Paul M. Lewis was the Department of Defense Special Envoy for closing the detention facility at Guantanamo Bay, Cuba in the Obama Administration. Lewis was appointed to this position by Secretary of Defense Chuck Hagel in October 2013. Prior to this appointment, he served as General Counsel and Minority General Counsel for the House Armed Services Committee. Lewis received his undergraduate degree in History from the University of Notre Dame in 1980. After his graduation from Notre Dame Law School in 1983, he served as a judge advocate in the United States Marine Corps, an Assistant District Attorney in the Manhattan DA’s office and as a trial attorney in the Organized Crime and Racketeering Section of the U.S. Department of Justice. He is admitted to the bars of New York, New Jersey and other federal jurisdictions.