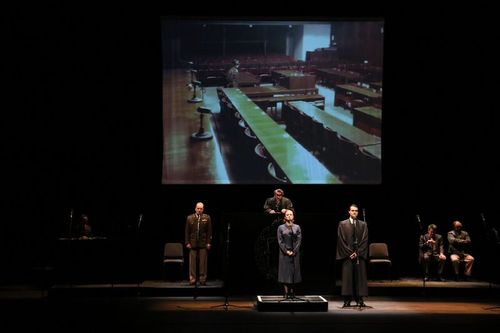 “Judgment at Nuremberg is a compelling reminder of the destruction created by hatred and intolerance, and the price we pay for lapses of those who sacrifice principles as they blindly follow the actions of a deranged dictator,” said L.A. Theatre Works Producing Director Susan Loewenberg, “It is a sad commentary that so much of the Nuremberg story still resonates today.”

Originally a television drama on the venerable ‘Playhouse 90,’ the 1961 film Judgment at Nuremberg earned rave reviews and numerous Academy Awards, including one for Abby Mann’s Best Adapted Screenplay. He later transformed the story into a work for the stage, which opened on Broadway in 2001 to great critical acclaim.

Made possible by Rick and Peg McFeeley Golden. Co-presented by the Debartolo Performing Arts Center and The Center for Civil and Human Rights.​​​​​​

Performance begins at 7:00 p.m. Contains mature content. Ages 15 and up recommended. This performance will be ASL interpreted.

Prior to the performance, scholars Douglass Cassel, Notre Dame Presidential Fellow and Professor of Law, and Stefanie Fischer, a researcher at the Center for Jewish Studies at Potsdam University, will discuss the past and contemporary significance of the Nuremberg trials. Among the subjects to be addressed are the enormous influence the Nuremberg Trials had on the development of subsequent human rights protections throughout the world, and the largely overlooked participation of Jewish organizations and the Jewish press in the process. Sean O'Brien, Assistant Director of The Center for Civil and Human Rights, will moderate the conversation.