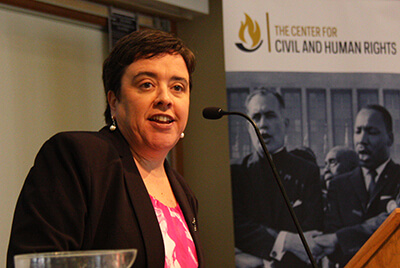 Dr. Angela Reed RSM, Sister of Mercy and a graduate of RMIT University’s School of Global, Urban and Social Studies, Melbourne, Australia, spoke at Notre Dame Law School on Thursday, November 3. Dr. Reed presented an overview of her research into human trafficking in the Philippines, and outlined the innovative new approach she recommends for dealing with the global problem in light of her findings.

Taking as a touchstone the work of political theorist Carol Bacchi, Dr. Reed began by introducing the concept of problematization, asking the audience to contemplate how they think about the problem of human trafficking. This fundamental question, she argued, is vital for shaping a discourse that leads to effective public policy. "How we present, or frame problems," Dr. Reed quoted Bacchi, "determines the way in which we see we can solve them."

Far from a monolithic conception of the problem, she suggested, human trafficking has conventionally been framed by a number of paradigms - each with its own set of imagery, assumptions, and logical conclusions regarding how to solve the problem.  Among the conventional paradigms, Dr. Reed identified globalization, economics, migration, gender, and organized crime among others. Missing from these frameworks, she suggested, was one necessary element: the voice of human trafficking victims themselves.

Dr. Reed's research with human trafficking survivors in the Philippines reveals, she said, life experiences that leave some individuals vulnerable to the influences of each of the other paradigmatic explanations. Common to all of the women she worked with was a connection between their entry into the human trafficking market and certain childhood experiences and circumstances. This connection was revelatory and surprising, according to Dr. Reed. "I asked them to tell me their trafficking stories," she said, "and they chose to begin telling me about their childhood."

Through this intimate knowledge of the women's lived experience, Dr. Reed proposed a new paradigm, the "life course" approach. She recommends a preventative approach to human trafficking in which 17 "optimal life course conditions" (OLCCs) are taken into account for protection, promotion, and development, in an effort to strengthen individuals and help make them less vulverable to being trafficked.

Dr. Reed's visit to Notre Dame was sponsored by the Liu Institute for Asia and Asian Studies and The Center for Civil and Human Rights. Her presentation can be viewed below. 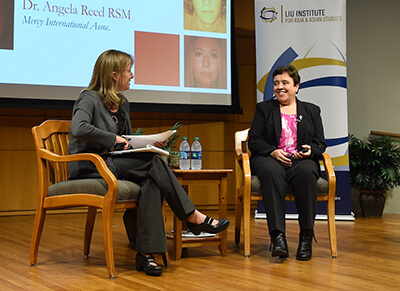 Following her talk at Notre Dame Law School, Dr. Reed sat with Christine Cervenak, Associate Director of The Center for Civil and Human Rights, for a conversation that touched upon her research methodologies and findings. The conversation was conducted as part of the Asia Working Group, a collaborative effort of the Liu Institute for Asia and Asian Studies and the Kellogg Institute for International Studies. The conversation can be viewed below.