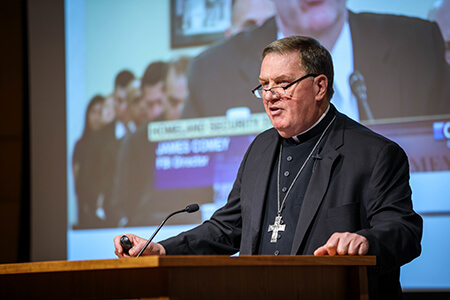 Concerning the debate over admitting refugees from Syria and other war-torn regions to the United States, the Indianapolis archbishop who clashed with Gov. Mike Pence and who will be made a cardinal next month by Pope Francis, has a message for Americans: Be not afraid.

“We need to urge public officials to avoid reactions that politicize events abroad, or in this country, and to avoid misplaced blame that creates an atmosphere of fear,” Archbishop Joseph Tobin said in an Oct. 14 speech at The Center for Civil and Human Rights at the University of Notre Dame. “Instead we urge public officials to stand in solidarity with Syrian refugees who themselves are victims.”

Archbishop Tobin recalled the history of faith-based organizations settling refugees in the United States, often in partnership with the U.S. government, and he urged Americans not to give into anxieties about terrorism or the economy that, he said, are stoked by the media and politicians.

“This is not an either/or situation,” Archbishop Tobin said. “The United States can continue to welcome refugees while continuing to ensure security of its citizens.”

Archbishop Tobin was joined by Professor Ebrahim Moosa, Professor of Islamic Studies at the Keough School of Global Affairs, for a conversation following the address. The Archbishop's talk was co-sponsored by the Center for Social Concerns.

Video of Archbishop Tobin's full address, and conversation with Professor Moosa, can be viewed here.

The archbishop recalled his clash last November with Mr. Pence, who is now running for vice president alongside Republican presidential nominee Donald J. Trump. Mr. Trump has proposed banning refugees from majority-Muslim countries from entering the United States, and while the governor was once critical of such a ban, he now supports his running mate’s views.

About a month before a family of four Syrians was due to arrive in Indiana last year, Mr. Pence asked the archbishop to direct Catholic Charities not to move forward with the placement. The pair met in the Indiana State House, and the archbishop recalled on Friday that he brought along to the meeting an Iraqi-American who had been resettled in Indiana about a decade earlier.

“I invited Ali to join our little group because I wanted to put a face on statistics,” Archbishop Tobin said. “I wanted the governor to understand that when we talk about refugees, this is what we are talking about.”

During the meeting, the archbishop recalled, the governor spoke about his desire to protect Indiana residents from terrorism and did not back down from his request that the Syrian family not be settled in the state.

“He advised me to pray and seek God’s guidance before deciding,” Archbishop Tobin said. “I was happy to follow that advice,” he said with a smile.

“After a day or two of that sort of stuff,” the archbishop said to laughter, “I was convinced the decision to bar the family was immoral, capricious and probably illegal.”

The next day, he called the governor to say that the church would move ahead with the resettlement and fund its immediate needs if the state refused to dispense federal cash it had received to help with resettlement costs, as Mr. Pence had threatened.

Archbishop Tobin said that the wider Indianapolis community stepped up after the governor announced he would not welcome Syrians to Indiana, noting that one of the first donations to the local Catholic Charities agency came from the largest synagogues in Indianapolis.

Mr. Pence, who was raised Catholic but who became an evangelical Christian in college, and the archbishop still work together on other issues, Archbishop Tobin said. “We don’t throw punches or anything,” he joked.

Still, Archbishop Tobin said sometimes it is incumbent upon people of faith “to just simply say no” to policies they find unjust.

Responding to a question from Notre Dame freshman Andrew Jarocki, who asked him how he would work with other elected officials refusing to receive refugees, Archbishop Tobin recounted a scene in an Italian anti-fascist novel, Bread and Wine, in which a parish priest tells a worried parishioner, “What keeps tyrants awake at night is the little person who goes into the piazza, the town square, and writes ‘no’ on the sidewalk.”

He said it is imperative that bridge-building remain the goal, but sometimes saying “no” is the best choice.

“For us,” Archbishop Tobin continued, “there are simply moments when we have to say no. No, we won’t part of ill-founded, immoral and in fact illegal policy. So I have a firm belief that you hang in there, and you listen, but you also speak.”

Archbishop Tobin contrasted Mr. Trump’s proposals with remarks Pope Francis made last week, in which he said countries must do more to welcome refugees. He called the two positions “diametrically opposed” and said the United States, too, must welcome more refugees.

He noted that Lebanon has resettled more than one million Syrians, despite being home to just 4.4 million people.

The archbishop said that despite pressure from government officials, including Mr. Pence, the local Catholic Charities agency continues its work to settle refugees, “including those whom the governor fears, welcoming 52 Syrians in the past 12 months.”

He said that when the United States gives into fear and targets certain groups of refugees as being unwelcome, it harms the nation’s security and well-being.

“The United States resettles refugees of all faiths,” Archbishop Tobin said. “Keeping some Syrian refugees out of the country based on their religion sends the wrong message to the rest of the world about who we are as Americans.”

“It’s crucial that the Catholic community and people of good will contest the climate of fear that has festered in this country, particularly in the past 15 years,” he said. “This fear dehumanizes us all, causes us to abandon our most precious religious and civic values.”

Michael O’Loughlin is the national correspondent for America and author of “The Tweetable Pope: A Spiritual Revolution in 140 Characters.” Follow him on Twitter at @mikeoloughlin.