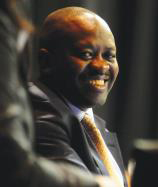 Mbuyiseli Madlanga, LL.M. ’90,  Justice of the Constitutional Court of South Africa and the Judge James J. Clynes, Jr. Visiting Chair in the Ethics of Litigation within the Judicial Process, will deliver the Clynes Chair Lecture at Notre Dame Law School. 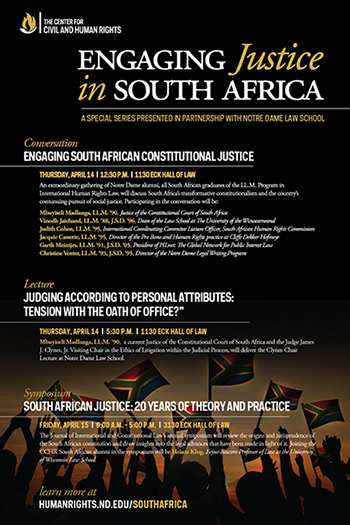 Justice Madlanga will address issues of racial and gender diversity on the bench, and discuss the various implications for transforming the makeup of a court - both its effect on the judicial decision-making and on the institution itself.

From 1987 to 1989 Justice Madlanga worked as a law lecturer at the University of Transkei, teaching customary law, the law of delict and the law of contract. After completing his LL.M. at Notre Dame in 1990 he worked in the Washington, D.C. office of Amnesty International. In 1991 he returned to South Africa and began practice as an advocate in Mthatha. In 1996, he was appointed to the bench of the Transkei Division of the High Court (now the Mthatha seat of the Eastern Cape Division) and later became its acting Judge President.  From 1998 to 1999, he was an acting judge on the Supreme Court of Appeal. The following year he became an acting judge of the Constitutional Court upon Arthur Chaskalson's invitation. In 2001, Madlanga resigned from the bench, and returned to private practice. In 2013, Madlanga was appointed permanently to the Constitutional Court.

A reception in Eck Hall Commons will follow the lecture.