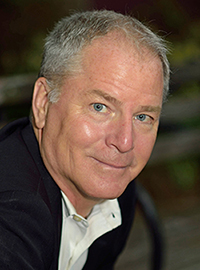 Human rights activist Larry Siems, editor of Guantánamo Diary and author of The Torture Report, visited CCHR to discuss the process of bringing Mohamedou's manuscript from classified secret to published book, and the larger context of censorship, secrecy, and accountability for post-9/11 detention and interrogation operations. 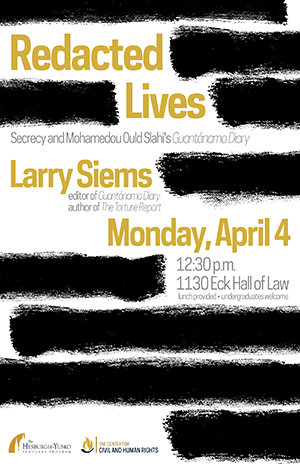 Larry Siems studied English and Classical Greek at the University of Notre Dame and poetry in the MFA program at Columbia University, and he was a fellow at the Fine Arts Work Center in 1987-1988. Since then he has published scores of articles on human rights and cross-cultural themes, and served for many years as director of Freedom to Write Programs for the writers advocacy organization PEN, first at PEN USA in Los Angeles and then at PEN American Center in New York. His work has appeared in a wide range of publications, including The New York Times, The Los Angeles Times, Slate, The Nation, LA Weekly, Ironwood, Epoch, and Southern Poetry Review.

He has three books: Between the Lines: Letters Between Undocumented Mexican and Central American Immigrants and Their Families and Friends (Ecco 1992, University of Arizona Press 1993); The Torture Report: What the Documents Say About America’s Post 9/11 Torture Program (OR Books, 2012); and Guantánamo Diary (Little Brown, 2015).

Mr. Siems' visit was sponsored by The Hesburgh-Yusko Scholars Program and The Center for Civil and Human Rights. His talk can be viewed below.