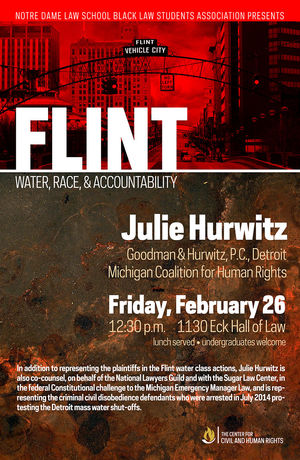 Julie Hurwitz, a partner with Goodman & Hurwitz, P.C., Detroit, and co-counsel in the federal Constitutional challenge to the Michigan Emergency Manager Law currently pending in the US Court of Appeals, spoke on February 26, 2016 about the ongoing legal issues in Flint.

Describing what she called “an unprecedented crisis, with water as the weapon, in both constitutional and political accountability,” Ms. Hurwitz detailed for a Notre Dame Law School audience the tension between state control, commercial interest, and the public good.

Focusing on the imposition of emergency management over economically distressed communities in Michigan, Hurwitz framed the Flint water crisis as a civil rights battle, in which minority communities were intentionally and disproportionately affected by the decisions of unelected “dictators.” Mounting evidence that officials knew of the health problems caused by tainted water from the Flint River, but covered up such knowledge, confirmed such a conclusion, according to Hurwitz.

Noting that several Flint public officials sat on the board of the Keregondi Water Authority – which was to replace the Detroit Water and Sewage Dept. as the source for Flint’s water – Hurwitz drew the connection between self-interest and a disregard for the rights of the public. “It's not simply a public health crisis, it's a crisis in democracy. And it's a crisis in issues of class and race and the rights of people to have a say,” Hurwitz said. “Follow the money and we’ll get to the bottom of it.”

Ms. Hurwitz and her partner Bill Goodman, along with associate Kathryn James, specialize in civil rights and government misconduct litigation. She has been adjunct professor of law at the University of Detroit/Mercy School of Law and was the Executive Director of the NLG/Maurice & Jane Sugar Law Center for Economic and Social Justice in Detroit. She has successfully tried several civil rights cases to verdicts in excess of $1 million, including police misconduct, prisoner rights, malicious prosecution, wrongful conviction, failure to protect and sexual harassment cases.

Ms. Hurwitz’s visit was sponsored by the Notre Dame Law School Black Law Students Association, with the support of The Center for Civil and Human Rights. Her talk can be viewed below.