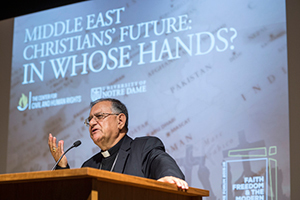 CCHR was proud to sponsor The Latin Patriarch of Jerusalem, Fouad Twal, as he spoke of the situation of Christians in the Holy Land on September 29, 2015, in the auditorium of the Hesburgh Center.

“Generally, people like to hear a ‘fair and balanced’ presentation, especially on a contentious subject,” Patriarch Fouad said. “I am not sure that this is possible when speaking about the Middle East and the Holy Land.”

Patriarch Twal is the senior churchman of the Latin Patriarchate, or Roman Catholic diocese, of Jerusalem, which includes the Catholics of Jordan, Palestine, Israel and Cyprus. “Jerusalem is the Mother Church and therefore has a responsibility to the entire world,” he said, “just as the entire Christian world has a responsibility to its Mother Church. The Christian faith started there. We are the custodians of the holy places so that, when pilgrims from around the world come there, they will find ‘living stones,’ living communities around the holy places.”

As he described it, Patriarch Twal presides over “a church of Calvary,” beset by multiple afflictions. “In addition to widespread fanaticism and violence,” he said, “there is Israel’s bureaucratic mistreatment of Christians in areas of family life and education, and the effects are likely in the long run to prove just as tangible as violence.”

Of Christians living in Israel and Palestine, Patriarch Twal said, “We live in a region where there is much hatred, and where the occupying nation portrays its own people as the victim. We believe the nation’s leaders fail to acknowledge Israel’s faults and fail to avoid the dangerous rhetoric that leads to the violence used by some of them. Inflammatory public speech on top of deep-rooted prejudice has created a climate of hate, and when there is hatred, terrorism increases.”

Religious leaders in the Holy Land adamantly oppose violence, whether inflicted by governments, groups or individuals, but the patriarch insisted that “similarly, a strong stand must be taken against the suppliers of arms, for they are major players in violence and war. Despite the condemnation by many, including our Holy Father Pope Francis, the weapons trade continues undiminished in our region. We must oppose those who would enter into the fray for the sake of self-interest and those who disregard basic human rights and the common good. This is very much in the interest of all of us.”

Patriarch Twal lamented the inattention of international media to the plight of the Holy Land’s Christians. “Lost in the conflict between Muslims and Jews are the Christians of Israel and Palestine, who are becoming a forgotten people while the more dramatic conflicts dominate the news,” he said. “Perhaps this is not surprising, given that Christians make up such a small percentage of both countries. Even if the media and the international attention are focused on the dramatic events of ISIS and the problem of refugees in Europe, the grossest facts on the ground cannot be overlooked — occupation, dispossession of property, oppression, violence, injustice, fear and discrimination. Palestinian Christians expect a stronger Church commitment both in educating the world leadership on the Middle East Christians’ crisis and in encouraging the people to remain in their country, and so keeping hope alive for a better future.”

Given what his “church of Calvary” is up against, Patriarch Twal said, “I, too, am anxious about the future, but hope for a bright future.” After all, he concluded, “Jerusalem is a city of surprises. The Resurrection happened there.” 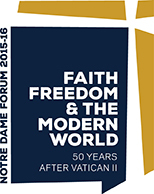 This event was part of the 2015-16 Notre Dame Forum on “Faith, Freedom and the Modern World: 50 Years After Vatican II,” commemorating the 50th anniversary of the publication of pivotal documents of the Second Vatican Council that have particular significance today.