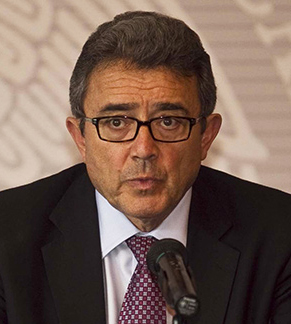 Ambassador Emilio Rabasa, Organization of American States, will speak on the coming changes at the OAS: the new SG, his new work plan, the new role of the Permanent Council, the Summit and the GA.

Emilio Rabasa Gamboa has been Mexico's Permanent Representative to the Organization of  American States (OAS) since July 2013. In the public sector, he was Secretary General of the Mexican Social Security Institute, Director of the Inter-American Center for Social Security Studies and Secretary General of the Inter-American Conference on Social Security. In the Ministry of Interior, he served as an Undersecretary of Civil Protection, Prevention and Social Rehabilitation and previously was Director of Government and Technical Secretary of the Federal Election Commission. In the National Human Rights Commission, he served as Legal Adviser to the Presidency. Between 1998 and 2000 he served as Coordinator for the Dialogue and Negotiation in Chiapas as a representative of the Ministry of the Interior. He was a professor and researcher at the Institute for Legal Research at the National Autonomous University of Mexico (UNAM). He has taught at the Faculty of Law and Political and Social Sciences at UNAM, UAM, ITAM, Ibero-American University and at Mexico City Campus of the Monterrey Institute of Technology and Higher Education. He did graduate studies at the Faculty of Political and Social Sciences of the University of Cambridge, England, obtaining his Master's Degree in Political Philosophy. He completed his PHD from the School of Law at UNAM.