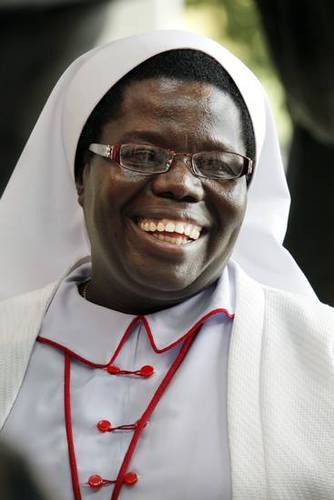 Learn how Sister Rosemary Nyirumbe has helped transform the shattered communities of northern Uganda and South Sudan by giving girls access to education, valuable trade skills, and social entrepreneurship. Listed with Pope Francis among the TIME 100 Most Influential People in the World, Sister Rosemary is on campus to talk about changing the world, one girl at a time.
A native of Paidha, Uganda, Sr. Rosemary Nyirumbe began serving the people of her country after joining the Catholic order of the Sacred Heart of Jesus in 1976. As director of St. Monica’s since 2001, Sister Rosemary has given hope to more 2,000 young women, many of whom were abducted, raped, tortured and forced to kill their own family members as soldiers in Kony’s army. In addition to providing a safe harbor for the former abductees, who are often shunned and persecuted by the people of their own villages, she has given them a way to support themselves through job training in tailoring, catering and other skills. Currently, approximately 250 girls and 250 children live at St. Monica’s. Sister Rosemary also oversees a second school in Atiak, Uganda.
Lunch discussion is free and open to the public.
Presented by the Center for Social Concerns and co-sponsored by the Center for Civil and Human Rights, DeBartolo Performing Arts Center, Gigot Center for Entrepreneurship, and the Kroc Institute for International Peace Studies.