During the military dictatorship of General Augusto Pinochet (1973-1990), human rights were systematically violated. After 25 years of transition to democracy, the politics of memory remain a controversial issue in Chile today. Hugo Rojas discussed the Chilean political transition as approached from the perspective of memory and indifference to past human rights violations.

Describing the current situation as one in which various segments of Chilean society coexist but are not reconciled, Rojas drew contrasts between the separate visions of the past and future among those with political, economic, or generational differences. Friendship, he said, across such lines is avoided and social neutrality is maintained until similarities in perspective are discovered - not a situation that fosters dialogue or understanding, much less reconciliation. The basic problem as described by Prof. Rojas is a failure to "socialize the truth." Justice is granted to only minimum levels and reparations to victims are kept secret; few public apologies are given and perpetrators of past injustices are, by and large, left free and unpunished. Even schools, he finds, do not not teach young people much about the events of 40 years ago.

Prof. Rojas's research is focused on trying to understand why such relatively large segments of the Chilean public choose to be indifferent to the past, rather than confront and resolve their history. Among the possibilities he considers are lack of empathy based on a perceived difference from the "other" of the past; choosing indifference as a survival tactic; or indifference as arising from differentiation in society in general, with the loss of shared experience that results from it. 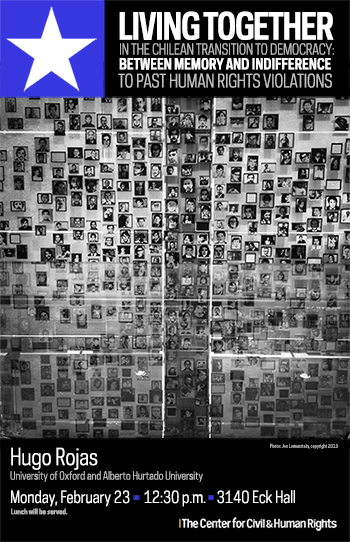 Hugo Rojas is Associate Professor of Sociology of Law and Researcher on Memory and Human Rights at Alberto Hurtado University. He received his Masters in Law, Anthropology & Society from The London School of Economics, and his Masters in Management and Public Policy from Adolfo Ibáñez University. He is currently reading a D.Phil. in Sociology at the University of Oxford. He contributed with the Chilean Commission on Torture and Political Imprisonment in the search of evidences and testimonies (2003-4). During 2007 he served as advisor on transparency during the first government of President Michelle Bachelet. He also worked in the Chilean Council for Transparency (2010), and the Chilean Commission on Television (2009). He is the author of “El Principio de la Multiculturalidad” (2002), coauthor of “Litigación Estratégica en el Nuevo Proceso Penal” (2005), “Libertad Sindical y Derechos Humanos” (2009), “Justicia Constitucional y Modelos de Reconocimiento de los Pueblos Indígenas en América Latina” (2012), and co-editor of “Sociology of Law in Chile” (2014).